SOCHI, Russia - Natalie Spooner had a hat trick Sunday as Canada's women's hockey team defeated Russia 6-1 in exhibition play in the city that will host the 2014 Winter Olympics. 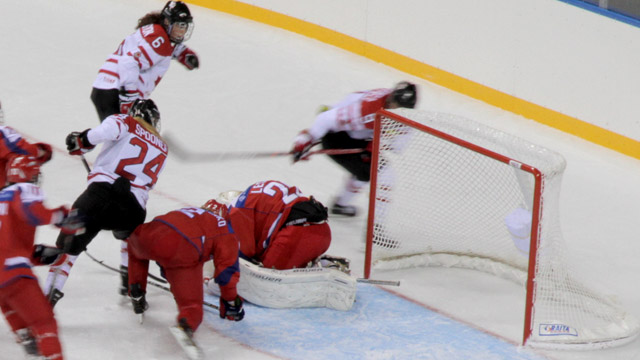 Jocelyne Larocque, Meghan Agosta-Marciano and Meaghan Mikkelson had the other goals for Canada, which will take on the Russians again on Tuesday.

The two-game series is a chance for the Canadian team to get together and also get accustomed to the venue and Sochi itself.

"First and foremost the goal is the familiarization so that we're as well prepared as for the Olympic journey as we can be,"said Canadian head coach Dan Church. "The second is that we get off on the right foot in terms of implementing our systems and getting the players accustomed to the expectation of the coaching staff."

Church says that Sochi is a city still very much under construction as the Games in February rapidly approach.

"There's a lot of construction here on the site," he said. "They're working 24 hours a day and it's amazing how much they get done."