Toronto, Ont. – Kelli Stack had a goal and two assists as the United States edged Canada 3-2 on Monday night at the Air Canada Centre. 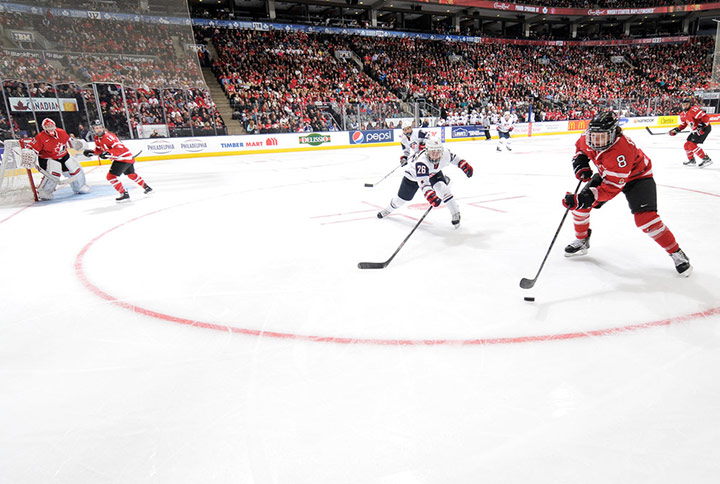 The win was the Americans' fourth straight win in the six-game exhibition series against the Canadians.

It was the final match-up between the two women's hockey powers ahead of the 2014 Olympic Winter Games in Sochi, Russia.

Stack, Hilary Knight and Megan Bozek all scored as the Americans opened up a 3-0 lead in the second period much to the disappointment of the announced crowd of 17, 227 at the home arena for the Maple Leafs.

Natalie Spooner (Scarborough, Ont./Toronto, CWHL) got Canada on the board with 34 seconds left in the middle period.

Canada's Brianne Jenner (Oakville, Ont./Cornell University, ECAC) cut the U.S. lead to 3-2 with a short-handed goal at 1:57 of the third.

Despite out-shooting the Americans 9-5 in the third period, Canada could not find the equalizer.

Canadian starter Geneviève Lacasse (Kingston, Ont./Boston, CWHL) made 27 saves in the loss, while Molly Schaus stopped 25 shots for the U.S.

The U.S. opened the scoring 2:32 into the second, as Knight re-directed a Stack feed between the pads of Lacasse.

With Jenner off for hooking, Alex Carpenter found Stack all alone in the slot; Stack beat Lacasse giving the Americans a 2-0 lead.

The U.S. appeared to take a 3-0 lead at 16:05 of the second period, when Knight knocked a loose puck out of mid-air past Lacasse; however, video review showed Knight knocked the puck down with a high stick and the goal was disallowed.

Canada got on the board at 19:26 as Spooner beat Schaus on a partial break.

Jenner got Canada to within one, putting home her own rebound after initially hitting the post.

Canadian defenceman Tara Watchorn (Pickering, Ont./Calgary, CWHL) who didn't play in Saturday's loss because of an unspecified injury, returned to action and was paired with Catherine Ward (Montreal, Que./Montreal, CWHL).