After dropping the series opener, Canada has won three straight games. The latest win marks the first time the home team has won a game in the series.

Jillian Saulnier (Halifax, N.S./Calgary, CWHL) scored the game-winner with 3:10 left in regulation. Jennifer Wakefield (Pickering, Ont./Linköping HC, SWE) created a turnover along the boards; Saulnier picked up the loose puck and scored with a backhand from the low slot.

Laura Fortino (Brampton, Ont./Markham, CWHL) iced it with 44 seconds to go, banking the puck off the boards in her own zone into an empty net. Renata Fast (Burlington, Ont./Toronto, CWHL) picked up the assist.

The game seemed destined for overtime, if not a shootout, as both Lacasse and her American counterpart, Alex Rigsby, stoned shooters all game long. Canada sent 21 shots Rigsby’s way. For Lacasse, it’s her second win of the series. She’s stopped 69 of 70 shots so far.

She was her team’s best penalty killer in the first period, stopping four shots only minutes into the game, the biggest when she denied a left-alone-at-the doorstep Alex Carpenter as the penalty expired.

Twice in the second period she came up with big saves on Kendall Coyne. First she flashed the glove during the penalty kill midway through the period. Minutes later, after Coyne deked around her defender, Lacasse turned her away at the doorstep.

Overall, the Canadian penalty kill continued to shine. After allowing two power play goals in the series opening loss, the team has since killed off 19 straight penalties.

Its own power play continued to struggle, though, unable to finish on five chances. For the series, it’s clicked only once in 15 opportunities.

Before the game, Haley Irwin (Thunder Bay, Ont./Calgary, CWHL) was presented a golden helmet to commemorate her 100th international appearance for Canada.

The teams now take a 10-day break from each other. They next face off on Dec. 15 in San Jose, Calif.

2019 WWC: CAN 5 – GER 0 (Quarter-Final)
Turnbull opened and closed the scoring to send Canada to the semis. 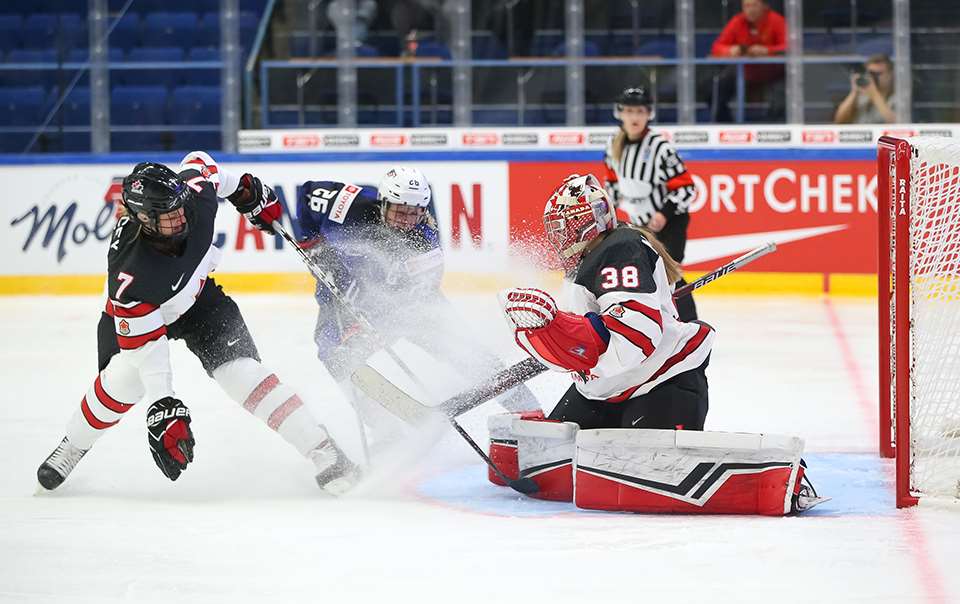