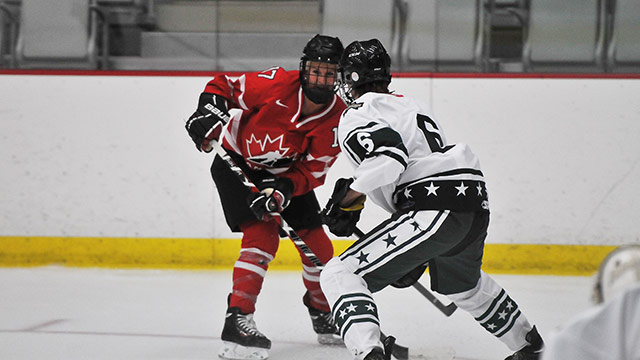 That being said it was rookie forward Melodie Daoust (Valleyfield, Que./McGill University, CIS) to get the ball rolling inside the Markin MacPhail Centre at Canada Olympic Park, opening the scoring midway through the first and adding another less than five minutes later to make it 2-0 early in the game. Wickenheiser assisted both of Daoust's markers, while Hefford added another goal for Canada at 16:53 in the period on an assist from Johnston to make it 3-0 going into intermission.

Fellow long-time National Women's Team vet Gillian Apps (Unionville, Ont./ Brampton, CWHL) fed Wickenheiser out front midway through the second to make it 4-0, and the Calgary Northstars continued to struggle in solving goaltender Genevieve Lacasse (Kingston, Ont./Boston, CWHL). That is until 17:26 in the middle frame when Derrick Reid let a fast shot go from the slot that went soaring past Lacasse to narrow the gap to 4-1, although still in favour of the ladies in red and white.

Caroline Ouellette (Montreal, Que./Montreal, CWHL) answered with a Canadian goal less than 15 seconds later to make it 5-1. Johnston provided the helper for Ouellette, and then after the centre ice face-off managed to get a hold of the puck and put one up on the board herself at 17:39 in the second to make it an impressive 6-1 going into the break.

Hefford scored Canada's lucky No. 7 midway through the third period, and while Brandon Sady was able to notch an unassisted marker for the Northstars with four minutes left in the third, there just wasn't enough time left on the clock for the Calgary boys' team to stage a comeback. Canada's National Women's Team skated away with its second win in as many days, starting an undefeated streak in its 2013-14 series against Alberta Midget Hockey League teams.