CALGARY, Alta. – She may have been in the penalty box for the dying minutes of the third period, but defenceman Tara Watchorn (Newcastle, Ont./Alberta, CWHL) quickly made up for it Wednesday, stepping onto the ice after she’d done her time to quickly snap up the puck, skate down the ice all alone with it, and put it into an empty net to seal a 3-1 win for Canada over the Calgary Royals in the Midget Series opener at the Markin MacPhail Centre. 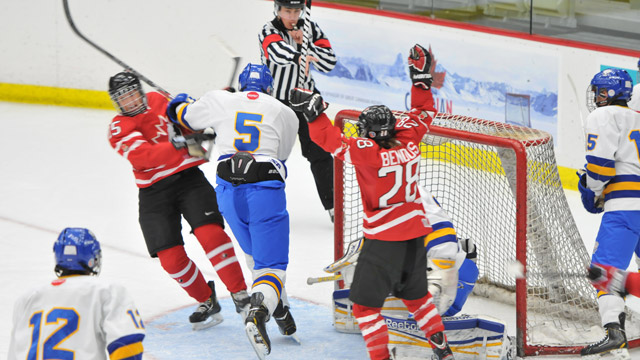 Watchorn’s game-clincher came in the final 23 seconds on the clock.

The exciting game inside Hockey Canada’s home arena at Canada Olympic Park was the first of many in this season’s National Women’s Team series against AAA teams from the Alberta Midget Hockey League, which serves as important on-ice preparation for the 2014 Olympic Winter Games in Sochi, Russia next February.

Canada both capped off and started off Wednesday’s game strong, with forward Hayley Irwin (Thunder Bay, Ont./Montreal, CWHL) capitalizing on a scramble out front by sliding the puck past the Calgary Royals goal line just a minute and a half into the game. Lauriane Rougeau (Beaconsfield, Que./Cornell University, ECAC) and Meaghan Mikkelson (St. Albert,

Alta./Alberta, CWHL) were credited with assists on the first goal of the night.

Forward Mélodie Daoust (Valleyfield, Que./McGill University, CIS) followed suit less than five minutes later, making it 2-0 for the red and white at 5:54 in the first, with a little help from Vicki Bendus (Wasaga Beach, Ont./Brampton, CWHL) and Jenelle Kohanchuk (Winnipeg, Man./Boston University, HE).

The Calgary Royals started to pick up the pace, holding Team Canada off for the remainder of the period, and coming out in the second ready to narrow the gap on the scoreboard. And that’s exactly what they did, solving National Women’s Team netminder Shannon Szabados (Edmonton, Alta./Northern Alberta Institute of Technology, ACAC) to make it 2-1 less than a minute into the middle frame.

But that’s all Szabados and teammates would allow for the rest of that period and throughout the third, holding off the Calgary Royals until the bitter end, even when they pulled their own goalie on a power play, in a valiant attempt to tie it up and send it into overtime.

That’s when Watchorn finished off her penalty, and finished off the game, for the 3-1 final in Canada’s first game of its 2013-14 Midget Series. Gillian Apps (Unionville, Ont./Brampton, CWHL) recorded the assist on Watchorn’s marker. Szabados made a solid 26 saves over three periods of play.

The red and white are back at it again Thursday, Sept. 26, when they take on the Midget Calgary Northstars at 7:15 p.m. MT.  Follow all the action at www.hockeycanada.ca/nwt, www.facebook.com/hockeycanada and www.twitter.com/hc_women.