CALGARY, Alta. – The Midget AAA Calgary Flames started and ended strong at this weekend's Icebreaker Tournament at the Markin MacPhail Centre, beating the SEAC Tigers 4-1 in their final game Sunday. 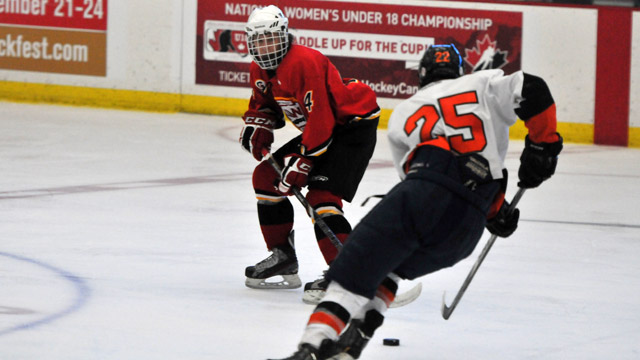 The Calgary-SEAC re-match proved to be just as intense as the original, with penalties again handed back and forth through all three periods in a highly physical on-ice battle. But the Flames managed to get on the board early in the game, with Dondre Watson finding the back of the SEAC net at 3:26 in the first. Fellow forward Carter Czaikowski was able to follow suit by capitalizing on a power play, making it 2-0 for the Flames at 6:29 in the period.

Calgary carried its lead into the second and the puck flew up and down the ice through much of the period, but being sent to the box was again an issue for both teams. It wasn't until 18:07 on a power play of its own that SEAC was finally able to narrow the gap on a goal from Michael Doneff, making it 2-1, albeit for a short period of time. Calgary regained its two-goal lead when Evan Tschumi scored his first of two on the game in the last 25 seconds of the middle frame.

The two Alberta Midget Hockey League teams continued to push, rub and shove into the third, but Tschumi's second goal at 16:57 in the period sealed the 4-1 final for Calgary. A late game time-out wasn't enough to get SEAC in the game, and the Flames snagged the bragging rights over the Tigers this time around.

This weekend's Icebreaker Tournament has been a warm-up to Team Canada's exhibition schedule for the 2013-14 season, which includes more than 30 games against Midget AAA teams from the Alberta Midget Hockey League. These games are pivotal as Canada's National Women's Team prepares for the 2014 Olympic Winter Games in Sochi, Russia. Get the full schedule at www.hockeycanada.ca/nwt.