CALGARY, Alta. – The South East Athletic Club Tigers finally out their claws Saturday inside the Markin MacPhail Centre, taking their game against the Calgary Flames to overtime in order to snag their first win of this weekend's Icebreaker Tournament. 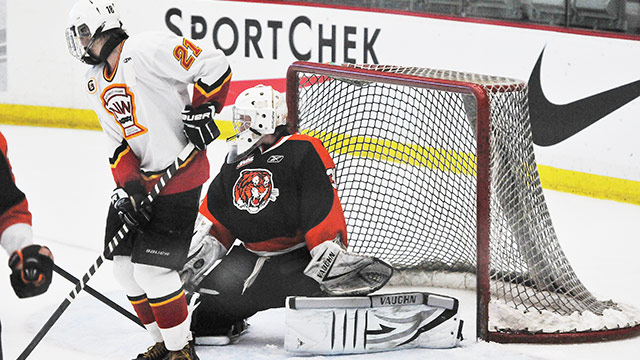 Jaeger White scored the unassisted game-winner at 4:27 in overtime, sparking a relieved celebration from his teammates both on the ice and on the bench, and giving the SEAC Tigers from Medicine Hat a 1-2 record at this tournament, which is being hosted by Canada's National Women's Team and features three teams from the Alberta Midget Hockey League. The Calgary Flames also have one win and two losses in the tourney.

While the extra frame was an exciting one, there was plenty of action from start to finish, with the Calgary Flames and SEAC Tigers trading penalties throughout, and special teams playing a role in several goals. Michael Doneff kicked off the scoring on a Tiger power-play at 13:06 in the first, and continued to play a key offensive role through all three periods, scoring a shorthanded marker in them middle frame and tying it up at 5-5 late in the third to snag a hat trick and send the game into overtime. Carson Pickett was also a major contributor to the score sheet, assisting four of six Tiger goals.

On the Calgary Flames side, Patrick Lyster scored his team's first goal on a power play at 15:05 in the first and  added another on the man advantage before the first 20 minutes ran down on the clock. Dondre Watson and Zach Finlay also had a couple of points apiece for the Flames. But despite determined effort from the Calgary Midget AAA team, and plenty of fast-paced action to keep fans in the stands entertained, the OT heroics went to White and the SEAC Tigers.

But the Flames will have their chance for vengeance Sunday, as they face off against the Tigers again at 12:45 p.m. MT in their final game of the Icebreaker Tournament, which is a pre-season event being held to help prepare Canada's National Women's Team for the 2013-14 season, including the 2014 Olympic Winter Games in Sochi, Russia.