CALGARY, Alta. – Make that two straight for the Strathmore Bisons.

Tyler Sharuga opened the scoring midway through the first Friday evening, while Matthew Forchuk closed it off with the game-winner late in the third, to give Strathmore the 4-3 edge over the Calgary Flames - and its second straight win at this weekend's Icebreaker Tournament at the Markin MacPhail Centre. 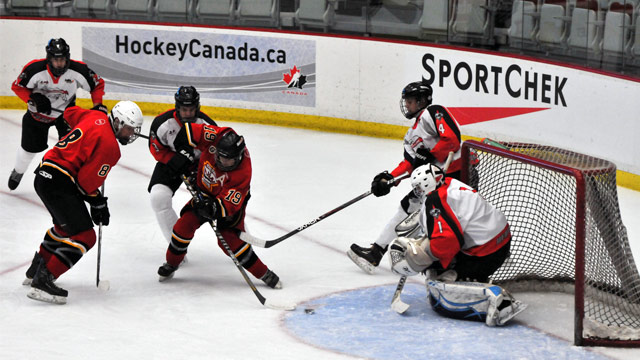 The tournament is being hosted by Canada's National Women's Team and features three teams from the Alberta Midget Hockey League. Sharuga kicked off Friday's scoring at 11:44 in the first, with help from Noah Bigland and Troy Van Tetering.

The Calgary Flames (1-1) put up a good fight on Day 2, however, with Curtis Ceccanese scoring a shorthanded goal just over a minute into the second to tie it up. That gave the Flames the momentum they needed to steal the lead, with Bryson Traptow putting a power-play marker into the back of the net to make it 2-1 at 3:57 in the middle frame.

But that would be the last lead of the game for the Flames. Clay Murray added another on the score sheet for the Strathmore Bisons (2-0) on a power play at 14:54 in the second to even it out again going into intermission.
An unassisted marker from William Conley early in the third gave the edge back to Strathmore, and despite another tying goal from Taran Mathieson of the Flames, the game belonged to the Bisons, with Matthew Forchuk answering back at 17:31 for the 4-3 final.

The Calgary Flames next face the SEAC Tigers from Medicine Hat on Saturday at 12 p.m. MT, while the Strathmore Bisons will look for their third straight win against Team Canada at 3 p.m. MT on Day 3 of the Icebreaker Tournament at Hockey Canada's home arena in Calgary.

Canada's National Women's Team will continue taking on Midget AAA teams from across the province throughout the 2013-14 season, in preparation for the 2014 Olympic Winter Games in Sochi, Russia. Follow all the Team Canada action live from the rink at www.twitter.com/hc_women.