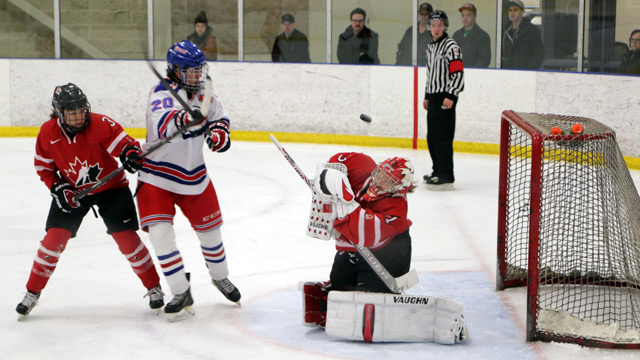 The Calgary Buffaloes managed to stage quite the comeback in the second and third periods, inside their southeast Calgary home arena, skating away with a 5-1 win over the Canadian contingent.

Johnston's goal came at 17:58 in the opening frame, on a pass from Brianne Jenner (Oakville, Ont./Cornell University, ECAC), to make it 1-0 going into the first intermission.

"We had dumped it in, and as a line we were putting a lot of pressure down low," Johnston said after the game. "It kind of just popped out to Jenner, and she passed it to me in the corner, and no one was really on me, so I just stepped out and went far post and it went in."

But the Buffaloes came out determined to even the score in the second, and that's exactly what they did, using special teams to their advantage. Matthew Phillips managed a shorthanded goal at 3:46 in the period and Jake Hedrick scored on a power play at the 10-minute mark to steal the lead and make it 2-1 in favour of Calgary.

Canadian netminder Geneviève Lacasse (Kingston, Ont./Boston, CWHL) made some pretty saves, but the Buffaloes kept plugging away in front of her net, and Jackson McKinstry was able to make it 3-1 before time on the middle frame ran out. Canada kept putting pressure on the opposition going into the third, but the canucks just couldn't seem to find the back of the net despite a couple of power plays.

Anthony Orubor made it 4-1 on a power play four minutes into the third, creating a tough deficit for Canada to rectify so late in the game. With time running out on the clock, Canada pulled Lacasse to put the extra player out on the ice. A Calgary penalty gave Canada a 6-on-4 advantage late in the game, but the red and white still couldn't put the puck past the goal line. Carsen Twarynski scored an empty-netter in the final 13 seconds to seal the win for the Buffaloes.

"I think they just got a couple of quick goals, and then we started breaking down a little bit," Johnston reflected. "We had our chances; (next time) we just have to really bury them."

Canada will have its chance to do exactly that Saturday, Nov. 30, when the red and white take on the Calgary Royals at Stu Peppard Arena. The puck drops at 7:30 p.m. MT on the next game in Midget Series action. Canada's National Women's Team is playing a full 2013-14 schedule against Alberta Midget Hockey League teams as part of its preparation for the 2014 Olympic Winter Games in Sochi, Russia, next February.

Follow all the action this season at twitter.com/hc_women, www.facebook.com/hockeycanada and on Hockey Canada's official website at www.hockeycanada.ca/nwt.