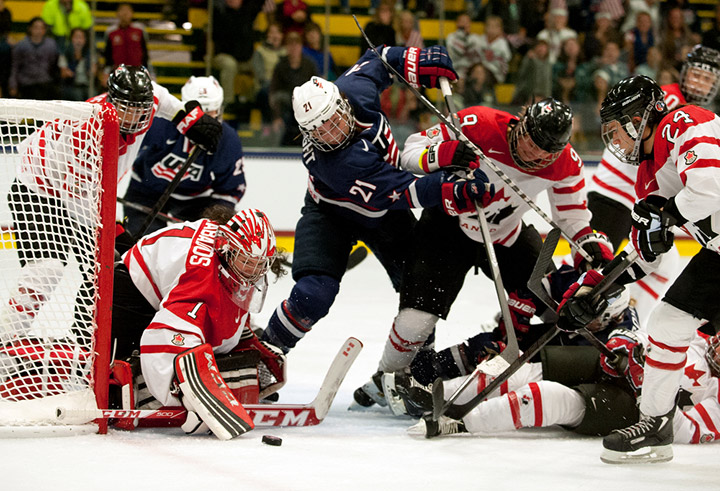 Tara Watchorn (Newcastle, Ont./Calgary, CWHL) scored in the third period before the U.S. rallied with two goals, only to fall 3-2 to Canada inside Gutterson Fieldhouse at the University of Vermont.

The game is the first of six meetings between the rivals prior to the Olympic Winter Games in Sochi, Russia, in February.

The results mean little, but the preparation is key for two teams likely to meet again in the gold medal game in Sochi. Canada’s National Women’s Team, the three-time defending Olympic champions, and the U.S., have met in three of four Olympic finals, and all 15 women's world championships.

Canada's head coach Dan Church had that loss at the worlds in mind after Saturday’s win.

“I think we wanted to set the tone here for the series,” he said following the game. “We also wanted to have a little redemption based on our last game. I think that's the way it's going to go for both teams as we move through this year. No one's going to want to let the other one get up too many, so it was a good start for us.”

Watchorn made it 3-0 on the power play at 4:45 in the third. The 23-year-old defenceman is one of 27 players hoping to make the 21-player Olympic roster. The 27 players are currently based out of Calgary, Alta., where they’re training, travelling from and playing a full schedule of exhibition games not just against the United States, but also against AAA teams across the Alberta Midget Hockey League.

“I'm one of the younger defencemen coming in, and for me I'm just enjoying the entire process and trying to find my role and keep it simple on the blue line, and hopefully be there when the time comes for Sochi,” Watchorn said.

But the Americans certainly made the Canadians work for the win. Brianna Decker scored with a 5-on-3 man advantage at 11:05 in the third and Gigi Marvin got the U.S. within one at 14:39 in the period.

“I thought the first 40 minutes, we really dictated the pace,” Church said. “A couple five-minute (penalties) and a game misconduct there at the end of the game; our players stood up for our goaltender.

Emotionally, that's really important for our development as a team as well.”

Canada and the U.S. next meet Thursday in Boisbriand, Que. Follow all the action at www.facebook.com/hockeycanada, www.twitter.com/hc_women and www.hockeycanada.ca/nwt.