CALGARY, Alta. – A preoccupied Canada’s National Women’s Team fell 5-1 to the United States on Thursday, as the red and white tried to come to grips with the sudden resignation of their head coach. 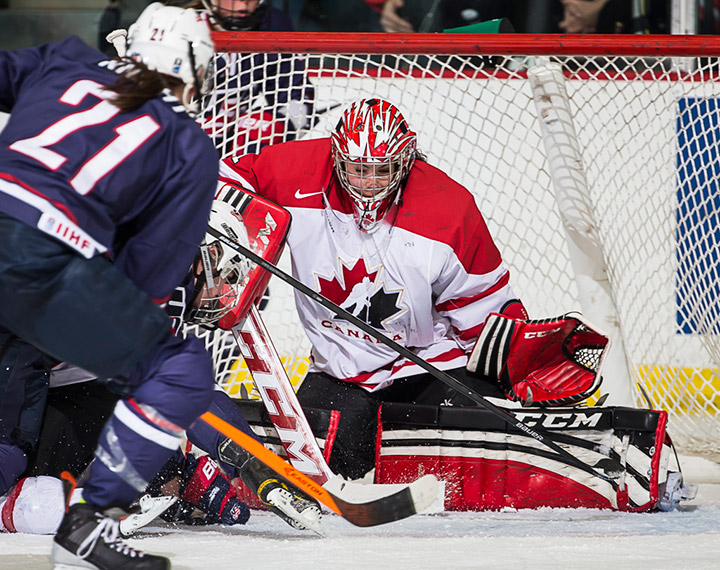 Canada wasn't in the game from the outset. Head coach Dan Church left Calgary in the morning without addressing the players. Assistant coaches Danielle Goyette and Lisa Haley are co-coaching the team until Church's replacement is named.

The loss snapped Canada's three-game winning streak against the Americans since losing to them in this year's final at the 2013 IIHF Ice Hockey Women’s World Championship in April.

“It was an emotional day,” forward Caroline Ouellette (Montreal, Que./Montreal, CWHL) said. “A lot of different feelings around the team.”

“I suspect that's always the case when a head coach steps down in the NHL. It's just never happened to us. I think we have some people who are feeling mixed emotions.

“That's not an excuse. We clearly were not the better team tonight. There are a lot of areas of our play that were exposed and that we weren't good at. Our passing wasn't sharp, our changes, and those are details we cannot have go that bad.

“Maybe we were cruising a little bit, having three successful games against them. They took what made us successful in the past games and shoved it at us. They were better on the forecheck and quicker on loose pucks,” Ouellette said.

Goyette, who won gold medals in women's hockey with Canada at the 2002 and 2006 Olympic Winter Games, pointed out major distractions can happen and the team must learn to play through it.

“Any situation like that can happen at the Olympics,” she said. “It could happen at the world championship. If something happens really major, we have to be able to turn the switch for two and a half hours and play the game and take care of business,” she said.

Canada's all-time leading scorer Hayley Wickenheiser (Shaunavon, Sask./University of Calgary, CIS) suffered a lower-body injury on her second shift. The forward went down in the neutral zone, got up slowly and skated in pain to the bench.

She briefly returned to the ice late in the first period, but did not appear the rest of the game.

“The doctor had a quick look at her,” Haley said. “She doesn't feel it's anything too serious. Obviously they're going to take another look at it tomorrow to see how it responds, but everybody is pretty optimistic; it's going to be a day-to-day thing.”

Canada and the U.S. scheduled six exhibition games against each other prior to the Olympic Winter Games in Sochi.

The Americans were also upset 3-0 by Finland in at the 4 Nations Cup, so they were highly motivated to beat Canada on the opposition’s home ice Thursday. The Americans have individual speed and skill, which makes them lethal on the power play. They scored twice with a man-advantage.

“We've just been working on getting better,”  U.S. head coach Katey Stone said. “We need to get better in our end. That has been the primary focus since November, honestly. Not throwing pucks around and chasing pucks. Trying to possess as many pucks as we can and working our way up the ice zone by zone.

“It sounds really dull, but it's paying dividends for us. We've got plenty of kids who are creative offensively, explosive offensively. We let them go, but we've got to take care of their own end,” she said.

Canada's team game has been superior because the women play high-tempo games against male Midget AAA teams. But the host team's game was disjointed Thursday.

“We have to respect Dan Church's decision, but at the same time we have to go to work,” Goyette said. “But, hey, we're human. Right now it's difficult for the team and difficult for everybody around the team.

“Tonight it was hard to focus, but we can't use that as an excuse. I don't think we played the game tonight. I think we were watching the game and it cost us.”