STOCKHOLM, Sweden - Led by Steven Stamkos and his four-point performance, Canada's vaunted offence emerged at the IIHF Ice Hockey World Championship with a 7-1 win over Norway on Tuesday. 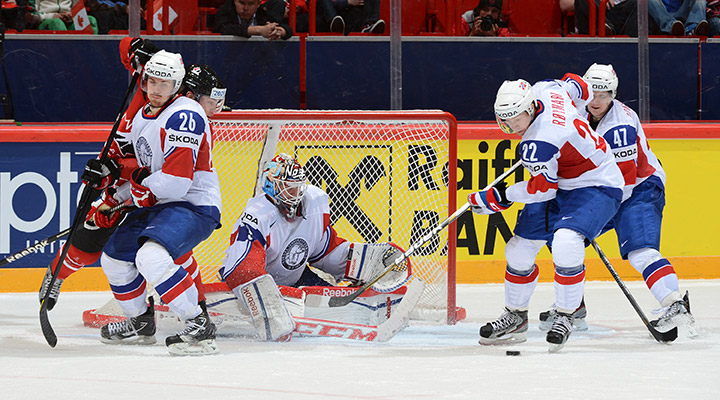 Canada (2-0-1) played its best opening period of the tournament and led by four goals after the opening 20 minutes.

“We stressed coming out in the first period and getting some momentum,” Stamkos said.

The Tampa Bay Lightning star, a two-time winner of the NHL's Maurice Richard Trophy that goes to the league's top goal scorer, assisted on three goals in the first period. Stamkos scored in the third.

“You always want to be a difference-maker in every game you play in,” he said.” I try to pride myself in that and have learned from a lot of good players playing with (them) over the years. The whole team came out ready to play tonight.”

Taylor Hall of the Edmonton Oilers collected his first two goals of the tournament.

Oilers goaltender Devan Dubnyk made 13 saves for his second win of the tournament.

Canada was second in the Stockholm pool with seven points. Switzerland led with eight.

The international experience and talent of Canada's forwards is the strength of the team. But Canada's 22 players had just three practices together prior to their first game here.

The Canadians had sluggish first periods and trailed by a goal in both a 3-1 win over Denmark and a 3-2 shootout loss to Switzerland to open the tournament.

Canadian head coach Lindy Ruff felt his team was playing too much “after you” hockey and encouraged his forwards to pass less and shoot more.

“We wanted to be real aggressive in the offensive zone,” Ruff said.” I think the important part is we were getting the first opportunity but it was followed up by a quick second opportunity.”

“We played a better first period, which I think made the difference.”

Canada had more than one forward driving the net in Norwegian territory and that put pressure on the flanks of Volden.

“The more times we get out there with each other and communicate with each other, the more comfortable guys are going to be with the puck and knowing where guys are,” Skinner said. “I think that's what you saw today.”

The Norwegians are ranked No. 8 in the world behind Canada at No. 5. The two countries will be in the same pool at the 2014 Winter Olympics in Sochi, Russia, next year along with Finland and Austria.

Stamkos and Eberle opened up ice for their teammates in the offensive zone with hustle, vision and skill. Stamkos dived to execute a goal-mouth pass for Ladd to finish on the important first goal for Canada at 4:45.

Eberle sent a backhand pass from the backboards out to Hall alone in the slot for his first goal early in the second.

On Canada's third goal scored by Duchene, Eberle took three strides in from the blue-line to draw Norwegian defenders to him. He shovelled a backhand pass over to the Avs' forward for Duchene's third goal of the tournament.

“With only three practices before, sometimes it's tough to get going with a lot of new people, but we're getting there and I felt today was a step forward,” Stamkos said.

Notes: Canada is 20-1 all time versus Norway in world championship games with the lone loss a 4-3 decision in 2000 …. Norwegian defenceman Ole-Kristian Tollefson, a former Columbus Blue Jacket, and forward Marius Holtet did not play Tuesday because they were serving one-game suspensions …. Danish captain Patrick Thoresen is a former Edmonton Oiler