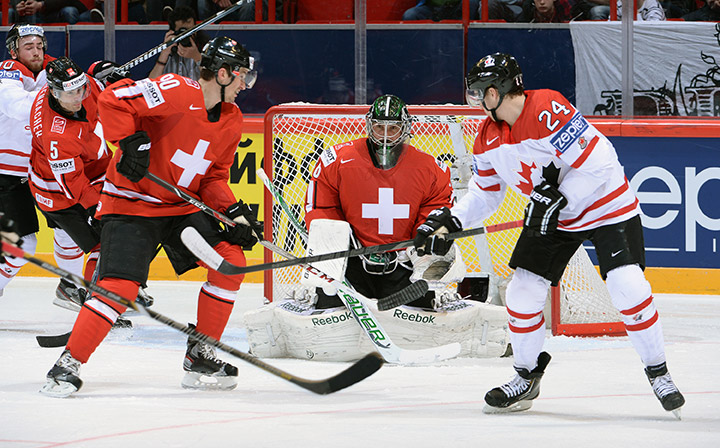 Too much passing and not enough getting the puck on net in regulation were the root causes of a 3-2 shootout loss to Switzerland.

Canada's inability to score more than one goal in eight rounds of a shootout will be the talk of the game, but it was a secondary issue.

Canada passed the puck around for 34 seconds with an extra attacker and never got a shot away during a delayed penalty early in the second period. Switzerland intercepted a pass to kill the play. That was a snapshot of Canada's loss.

"We're passing to open people and the puck isn't going to the net enough," Ruff said. "We had a couple of wide-open looks that we could have shot and didn't shoot. That's a bit of the mentality that we've got to get away from."

Switzerland's win was just the second in 28 world championship game against Canada, following a 4-1 victory in 2010.

The Canadians mustered just three shots on Martin Gerber in the first period and 21 during regulation. The former NHL goaltender stopped Canada's Matt Duchene for the win after Reto Suri scored his second of the shootout on Canada's Mike Smith.

Duchene was the only Canadian to beat Gerber in the shootout and the Colorado Avalanche forward scored on the first of three attempts.

Jordan Eberle of the Edmonton Oilers was stopped twice. Steven Stamkos of the Tampa Bay Lightning and Philadelphia Flyers forwards Claude Giroux and Matt Read were also denied by 38-year-old Gerber, who won a Stanley Cup with the Carolina Hurricanes in 2006.

Smith was thrown into the deep end in his first world championship game for Canada. The Phoenix Coyotes goalie made 26 saves and stopped six of eight in extra shots.

"He gave us an opportunity to win it," Ruff said. "You can't criticize that. We had our opportunities and didn't take advantage of it."

"You'd probably pick some of the talent we had shooting to win you the game and it didn't go our way."

Canada earned four points out of a possible six from their two games in two days to start the tournament. They opened with a 3-1 win over Denmark and face Norway on Tuesday.

The strength of this Canadian team is the international experience and pedigree of the forwards. Ruff coached Canada to a silver medal in 2009, but there hasn't been a podium since. Canadian teams have lost three straight quarter-finals at the world championships.

The Swiss upset the host Swedes to start the tournament and have five points behind leader Norway with six in the Stockholm pool. The Norwegians edged Denmark 3-2 and Belarus edged Slovenia 4-3 Sunday.

Ilya Kovalchuk had a hat trick in Russia's 4-1 win over Germany and the United States beat Latvia by the same score in Helsinki. Russia and the Americans top the Helsinki pool with six points each.

The top four teams in each group of eight countries gets into the quarter-final round.

Sean Simpson of Brampton, Ont., took over as Switzerland's head coach when fellow-Canadian Ralph Krueger headed to the NHL and the Oilers.

"It's my job now to win for Switzerland, but it's very special to not only to win against Canada, but every time you play against Canada," Simpson said.

The coach believes his team's schedule of Sweden, Canada and the Czech Republic in their first three games is advantageous. He says the Swiss tend to up their game for the heavweights, but can struggle under the pressure to win against lower-ranked teams.

Also, the rosters of the Swedes, Canadians and Czechs are laden with NHL players who arrived in Stockholm just before the tournament due to the lateness of the lockout-shortened season.

"Those teams are going to get nothing but better, Sweden, Canada and I'm sure the Czechs will too because they've only been together for two days," Simpson said. "When I first got the schedule I thought it was good for us because we play the big guys first. And then the lockout came."

The Canadians trailed by a goal after the first period and scored twice to lead for a second game in row. They didn't protect that lead against the Swiss, who drew even on a bizarre play at 13:14 of the third.

Niederreiter was awarded the goal after a review. The puck bounced off the cross bar and fell into the crease in front of Smith. A protracted scrum ensued over the Canadian goaltender on his back. The puck eventually slid under him.

"We had a mad scramble in front," Smith said. "I just tried to seal the bottom and somehow it got kicked out from under me."

Canada had three practices as a team before their first game. Testing and trying out systems and generating team cohesion while trying to win games at the same time is a tall order.

"You're trying to learn on the go for sure which makes it a little tougher, but we've all played similar game plans," Ladd said. "I think the big thing is getting used to the big ice and how some of the teams play over here."

"Our starts have been slow and we've gotten better over the course of both games, which is good to see, but we'd probably like to create a little more offensively and that's simplifying a bit instead of making the pretty play."

Notes: Ruff moved Jordan Staal onto a line with his brother and captain Eric and Wayne Simmonds on Sunday. The Staal brothers were on the last Canadian team to win a world title in 2007 . . . Swiss captain Mathias Seger, 35, is playing in his 15th world championship, which ties the record held by Finland's Petteri Nummelin.