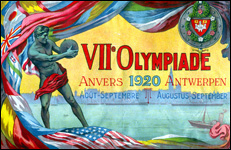 The 1920 Olympic Summer Games marked the first time a truly international hockey tournament took place. Canada was represented by the Winnipeg Falcons, the Allan Cup champions, many of whom were of Icelandic descent. The Falcons proved vastly superior to all opponents, winning their three games by an combined score of 29-1. A peculiar tournament format saw teams compete in elimination games for the gold; those teams which lost to the winner (Canada) played for silver; and those teams that lost to that nation (United States) played for bronze. The Europeans had only a crude understanding of hockey as it was enjoyed in Canada. They were trained in bandy, a hockey-like game played outdoors on a frozen soccer field with field hockey sticks and a ball. They were inexperienced in the arts of skating and stick-handling and were entirely unfamiliar with body-checking. Games consisted of two 20-minute halves and included seven a side (the extra player being the rover, which had been eliminated years earlier in Canada).