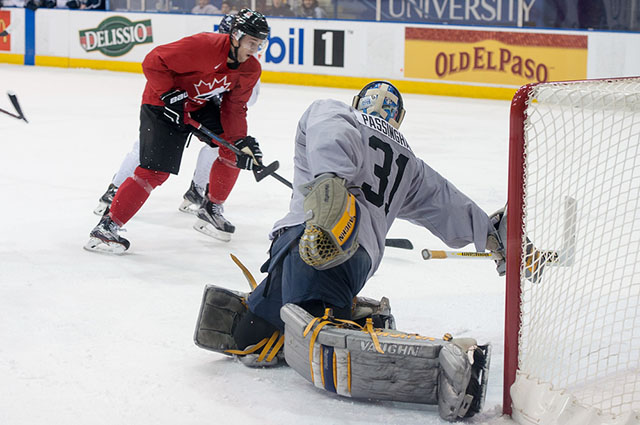 Zachary Fucale (Rosemère, Que./Halifax, QMJHL) made 23 saves in the win.

After a day of travel and two days of practice, the Canadian junior hopefuls were ready for game action and wasted no time getting on the board. Ninety seconds in Canada had registered five shots on net and the first goal of the game. Among a pile of players in front of a crowded crease, it was Ritchie finding the loose puck.

The Selects were able to slow Canada’s momentum and even briefly took it with a power play goal halfway through the first. But Crouse, one of only two 17-year-olds on the camp roster, restored his team’s lead with a wrist shot from the point. Less than two minutes later, Point skated in from the side of the net and swept a forehand low to the glove side.

The second period saw the game open up even more. The teams combined to score four goals in just over two-and-a-half minutes, with the highlight being Fabbri’s first of the night. The forward took the puck through the face-off circle and fought off two defenders to fire home a wrist shot from the slot.

After the Selects got one back 23 seconds into the third, the floodgates opened for good, as Canada found the back of the net four more times to close out the game.

Canada fired 57 shots on the CIS’s trio of goaltenders – Troy Passingham, Michael Nishi and Chris Perugini – the last one being Sanheim’s goal with two seconds left in the game.

2021 WJC: CAN 5 – RUS 0 (Semifinal)
Levi and Cozens led Canada past Russia and into the gold medal game.

2021 WJC: CAN 4 - FIN 1 (Preliminary)
Cozens opened and closed the scoring to help Canada atop Group A.

Credit
Recent News
Most Popular
Shannon Coulter - July 27, 2021
Putting passion to work
An Olympic soccer bronze medallist in 2012, Chelsea Stewart is taking what she learned as a high-performance athlete and using it to help Hockey Canada work towards another Games
Jason La Rose - July 26, 2021
The future is now
A closer look at Canadian content from the 2021 NHL Draft – from Owen Power to Taylor Makar
July 23, 2021
In My Own Words: Dylan Guenther
The potential first-round NHL draft pick talks about his journey through the game, staying active during the pandemic, and getting ready for the next step
July 21, 2021
Roster announced for Canada’s National Junior Team summer development camp
Team Canada coaching staff unveiled; Dave Cameron named head coach
June 30, 2021
Summer Showcase schedules announced for Canada’s national teams
Men’s, women’s and para hockey teams to host camps in Calgary
MORE
Accept
Our sites use cookies to help streamline your experience and enable us to plan future improvements. By continuing to use our site, you consent to cookies being used. For more information about how Hockey Canada handles the information we collect, please review our privacy policy.
© Copyright 2021 Hockey Canada