CANADA EARNS BYE TO SEMI-FINALS WITH BIG WIN OVER USA

Canada claimed first place in Group A and a bye to the January 3 semi-finals with a 3-2 New Year’s Eve win over the USA in front of a sold-out, ecstatic Pacific Coliseum. Kyle Chipchura scored the winner into an empty net as the Americans pulled goalie Corey Schneider in a late bid for the two points, since a tie would not have sufficed.

The Americans will play in the quarter-finals on January 2.

Cam Barker and Dustin Boyd, with his fourth goal of the tournament, also scored for Canada, and Steve Downie had two assists. Chris Bourque, with his sixth tally, and Peter Mueller replied for the Americans. The USA’s Phil Kessel, goalless through four games, added his eighth assist.

“We played well,” said Boyd. “Both teams battled to the end, and it was a hard-fought game. Fortunately for us, we got the empty net and put it in for the win.”

“It’s not fun when it’s a tie game and they end up winning the game because we pulled the goalie,” said Bourque. “But we needed that win and that was the thing we needed to do. It was obviously the right decision, but we couldn’t capitalize on it.”

“I felt really confident out there,” said Pogge. “The team played really well in front of me. I think we just played an amazing game, and we deserved the win.”

The final Round Robin game for both teams was played at a high tempo, with solid hits aplenty, although it rarely descended into the kind of trench warfare that sometimes ensues between these North American rivals.

With five club team captains and nine alternate captains on Canada’s roster, you’d expect plenty of leadership to be shown, and Team Canada’s C-wearer, Chipchura, showed the way for his mates with a strong forechecking effort.

It was Canada’s best all-around performance of the tournament to date, and the USA’s effort also couldn’t be faulted.

“We were a little anxious and nervous and made some mistakes early on that Canada was able to capitalize on,” said USA Head Coach Walt Kyle. “But to our leadership’s credit, we were able to settle things down in the room and played the rest of the game at a pretty good pace.”

Taylor Chorney took the first penalty for the USA at 2:09 after mauling Boyd deep in the American end, and the Canadian power play went to work. Just 26 seconds later, Barker’s wrister from the left point sailed through traffic and beat Schneider high to the glove side, and the crowd erupted.

With Andrew Cogliano off for hooking at 3:20, the USA exerted good pressure around Pogge’s net, but thanks to solid, positional team play and some thunderous physicality from crowd favourite Luc Bourdon, a first-round Vancouver Canucks pick, the Canadians weathered the storm.

Cogliano came out of the box and nearly teamed up with Chipchura for Canada’s second goal on a give-and-go rush, but Schneider tumbled back in an awkward snow angel position and barely kept the puck out. Moments later, he was forced to stone Michael Blunden right on the doorstep.

At 6:42, a beautifully executed 2-on-1 rush with Boyd and Steve Downie gave Canada a 2-0 lead. Boyd, rushing down left wing, fed the puck over to Downie in the middle, and with Schneider committed, Downie gave it back to Boyd, who coolly fired it into the gaping net.

The Canadians faced another big test when Blake Comeau was assessed a double-minor for high-sticking at 7:27, and this time the Americans made them pay. Three minutes later, it was 2-1 after Chris Bourque’s point shot tipped en route to the net and sailed in high to the stick side.

In the last minute of the first period, Cogliano found himself all alone right in front of the USA net, zinged a shot off Schneider’s left post, and raised his arms as if he’d scored, but it wasn’t to be.

Canada wound up facing a two-man disadvantage in the final minute of the opening frame, where the host side was assessed 12 total PIM to the USA’s two.

During the successful Canadian penalty kill early in the second period, Pogge made a stellar glove grab off Jack Johnson 37 seconds in and then got some help from his left post moments later as Johnson fired another bullet.

But the USA would tie the score at 2-2 on another power play. Peter Mueller walked in all alone on a Tom Fritsche feed, with Canadian D-man Ryan Parent caught out of position seeking a hit, and fired home a five-hole wrister at 8:10.

The USA’s Brian Lee hauled down Boyd 37 seconds into the third period, and Canada went to the man advantage. On Canada’s best chance, Boyd took a perfect cross-crease pass from Bolland but Schneider flung himself to the left and made a great save. A few minutes later, Ryan O’Marra got the puck in the slot but fired it off the side of the net.

After some wild end-to-end action that saw both Schneider and Pogge making close-in saves, the USA went to the power play with Blunden dinged for cross-checking at 6:55, and Canada’s goaltending remained solid. Just as the penalty ended, Pogge made a brilliant glove save on Kevin Porter, with the puck flipping up in the air and landing atop the net.

In the last five minutes the Canadians focused on protecting the lead, frequently dumping the puck in deep from the neutral zone.

With 1:03 remaining, Schneider was pulled for the extra attacker after a USA timeout. Chipchura salted it away with his empty-netter with 33 seconds left as five Americans were caught deep in the corner to Pogge’s left.

Downie was elbowed viciously by Jack Johnson right after the 3-2 goal, and had to be helped off by the team trainer. Johnson got a five-minute major and a game misconduct. Downie’s medical status will be re-evaluated on New Year’s Day.

The Player of the Game for Canada was Justin Pogge, whose name was chanted continuously by the crowd, and for the USA it was Jack Johnson. Team USA captain Kevin Porter accepted the award on Johnson’s behalf.

Canada improved its all-time WJC record versus the USA to 24 wins, five losses, and three ties.

With the victory, Brent Sutter joins Dave King and Terry Simpson as one of the only Canadian coaches to win 10 games at the IIHF World Junior Championships.

“It was a heck of a hockey game,” said Sutter. “I thought both teams played hard. Every kid on both lineups played hard and put it on the line tonight.”

“It’s nice to have a couple days off to recharge the batteries and get our mindset ready for whatever team we play,” added Boyd.

Canada: After coming into the tournament as an underdog to capture the gold medal, the host team has muscled out victories against the Finns (5-1), Swiss (4-3), and Norwegians (4-0). In 27 years of head-to-head competition, against the Americans, the Canadians have a commanding edge with 23 wins, five losses, and three ties, with 139 goals for and just 87 against. Fans can expect to see Justin Pogge in goal Saturday night for the Canadians, Pogge has won all three games so far for the red and white, posting a 1.33 GAA and a .914 save percentage. On the blue line, a pair of Val-d’Or Foreurs has led Team Canada, Luc Boudron and Kris Letang have combined for seven points in the three games. Bourdon leads the team in points with his goal and four assists, and could hypothetically become just the third defenceman in tournament history to lead Canada in points. Only Carlo Colaiacovo (2003), and Greg Hawgood (1988) have achieved that feat before. Up front, it’s been the newly formed line of Blake Comeau, Dustin Boyd, and Steve Downie leading the way. Downie was rewarded for his play on Thursday night by being moved up to the top line. Altogether, the trio has 10 points in the team’s three victories. With a victory tonight, Head Coach Brent Sutter could join some exclusive company as just the third coach to win 10 games behind the Canadian bench. Terry Simpson completed the feat in 1985-86, and Dave King did it in 1982-83. A win or a tie for the Canadians tonight would leave them in first place, cementing their bye to the semi-finals.

USA: The USA came into this tournament as one of the heavy favorites to win the whole thing, but got a surprising wake-up call with a tie on Friday night against the Swiss (2-2). The Americans picked up an 11-2 victory over the Norwegians on Monday night to open the tournament, and then squeezed out a 6-5 victory over the Finns on Wednesday night. The last time the Americans beat Canada was to capture their first and only gold medal at the 2004 tournament, where they picked up a 4-3 decision in Helsinki, Finland. Goaltender Cory Schneider has started two games for the Americans, both of which should have, on paper, turned out to be lopsided victories for the Americans. However, after picking up the 11-2 victory against the Norwegians, the red, white and blue failed to beat the Swiss on Friday night with the Canucks draft pick between the pipes. Jeff Frazee, on the other hand, held on versus the Finns on Wednesday and hasn’t played since. On the blueline, the towering defensive pairing of Erik Johnson and Jack Johnson has led the way, combining for six points. More importantly, they’ve made it difficult for opponents to find room on the ice with their physical presence. The forward line of Chris Bourque, Phil Kessel, and Kevin Porter has combined for 18 points in the three games for the Americans. Kessel’s seven helpers have put him third in the tournament scoring derby. However, the young man touted as the likely #1 overall at next year’s draft has yet to find the back of the net himself. Will this be the night Kessel breaks out? In order for the Americans to gain first place and bypass the quarter-finals, they’ll need a victory over their cross-border rivals tonight. 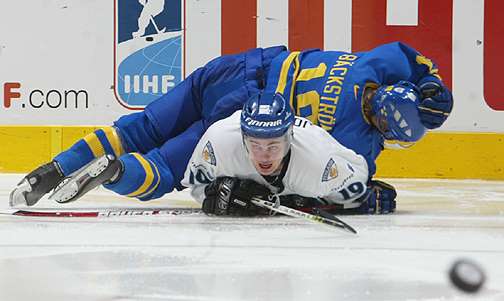 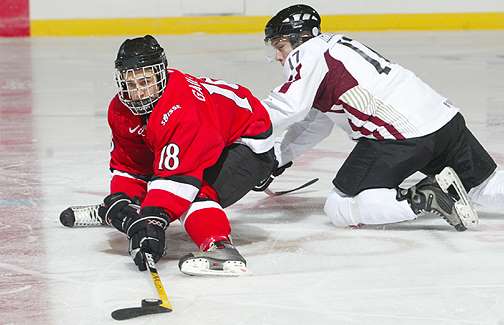 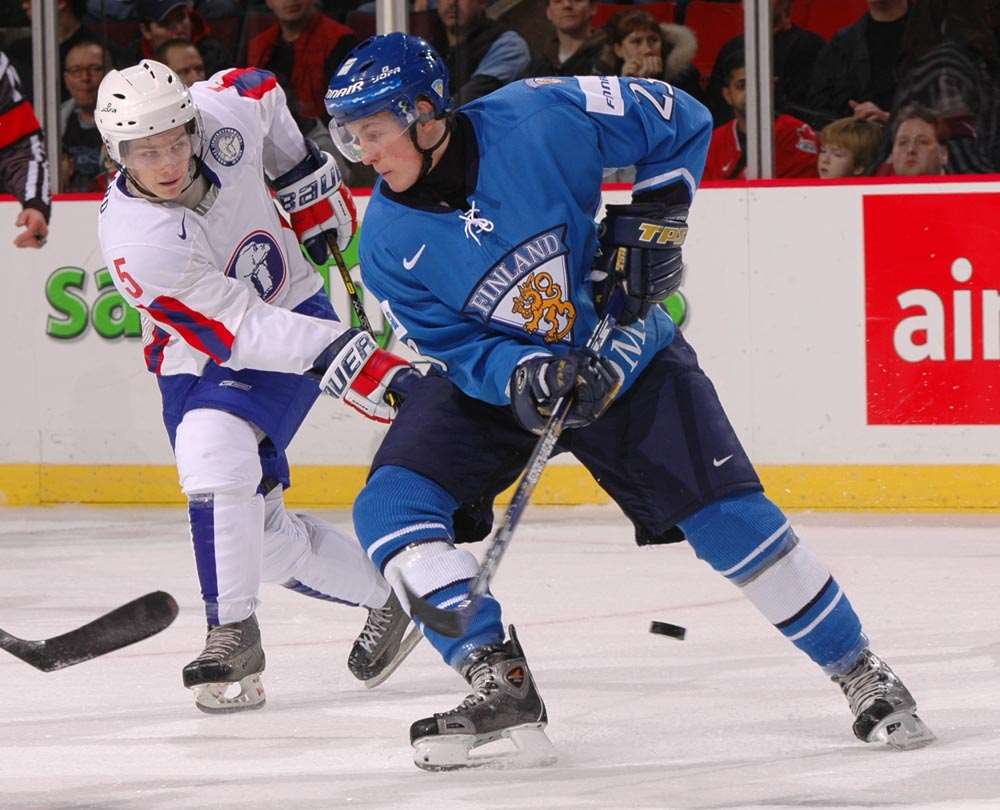 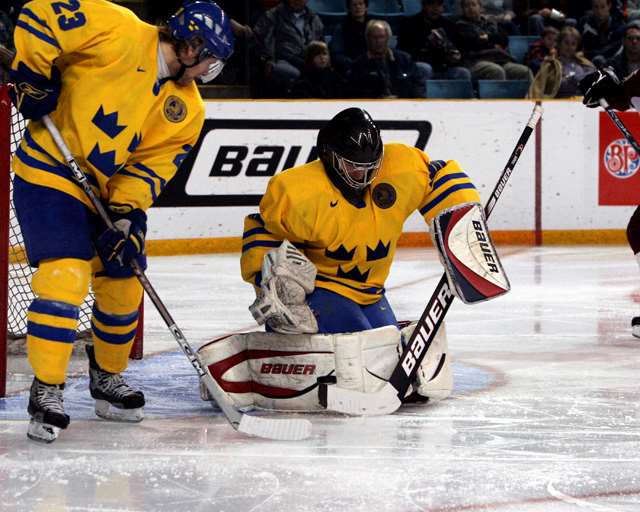 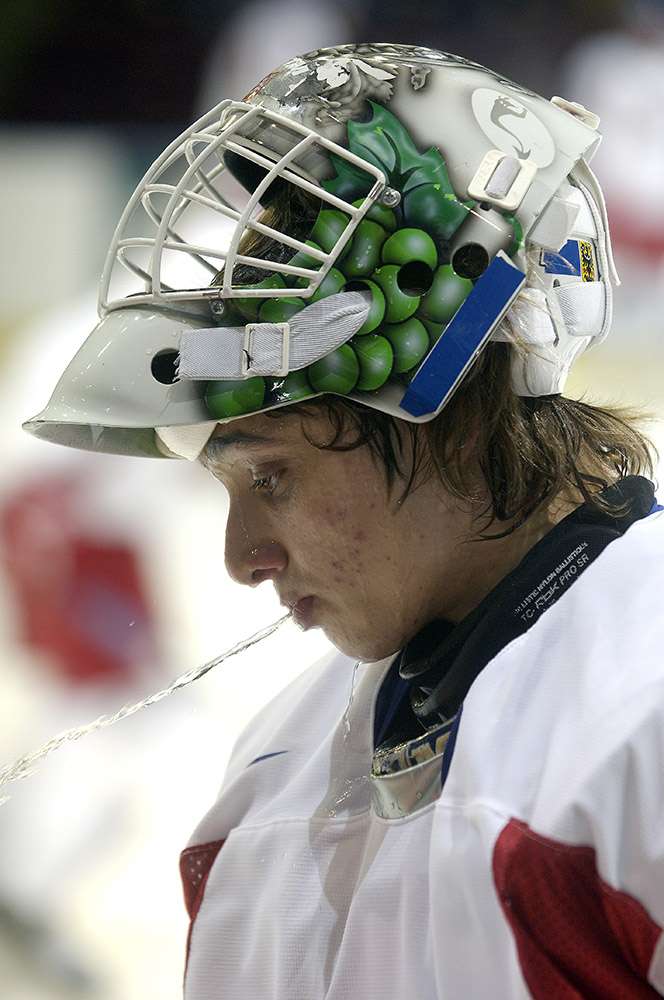 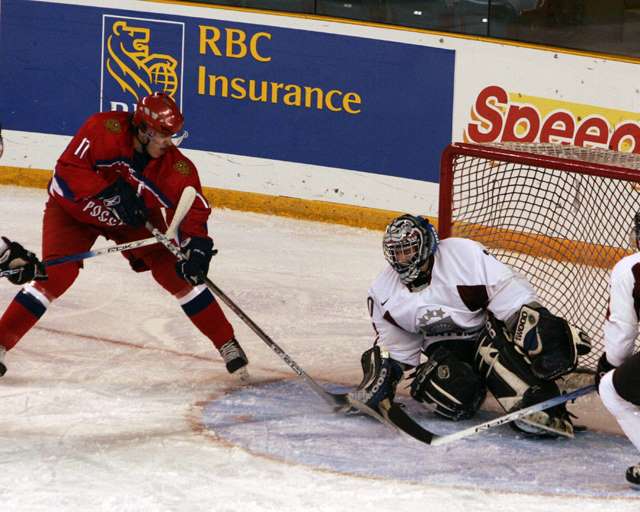 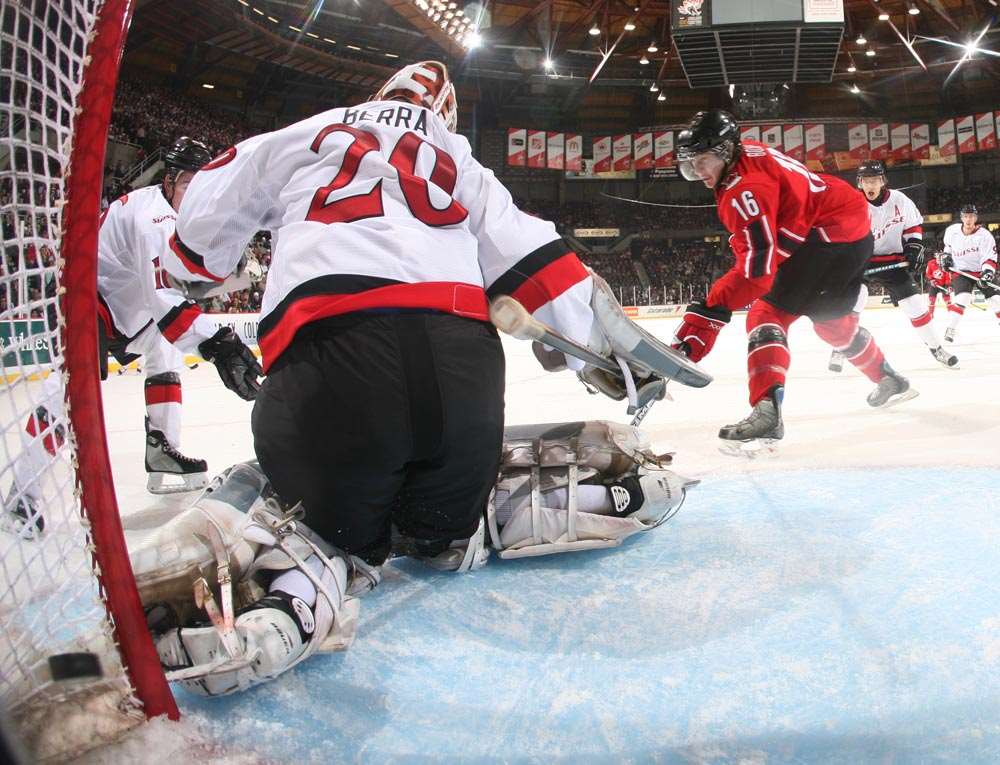 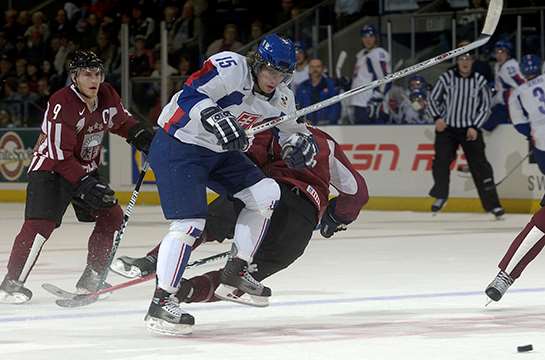 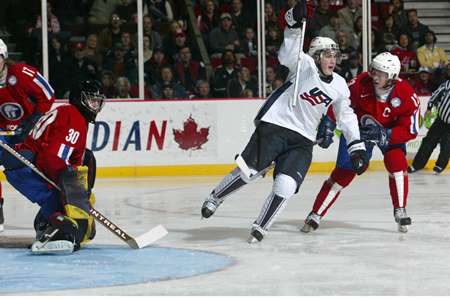 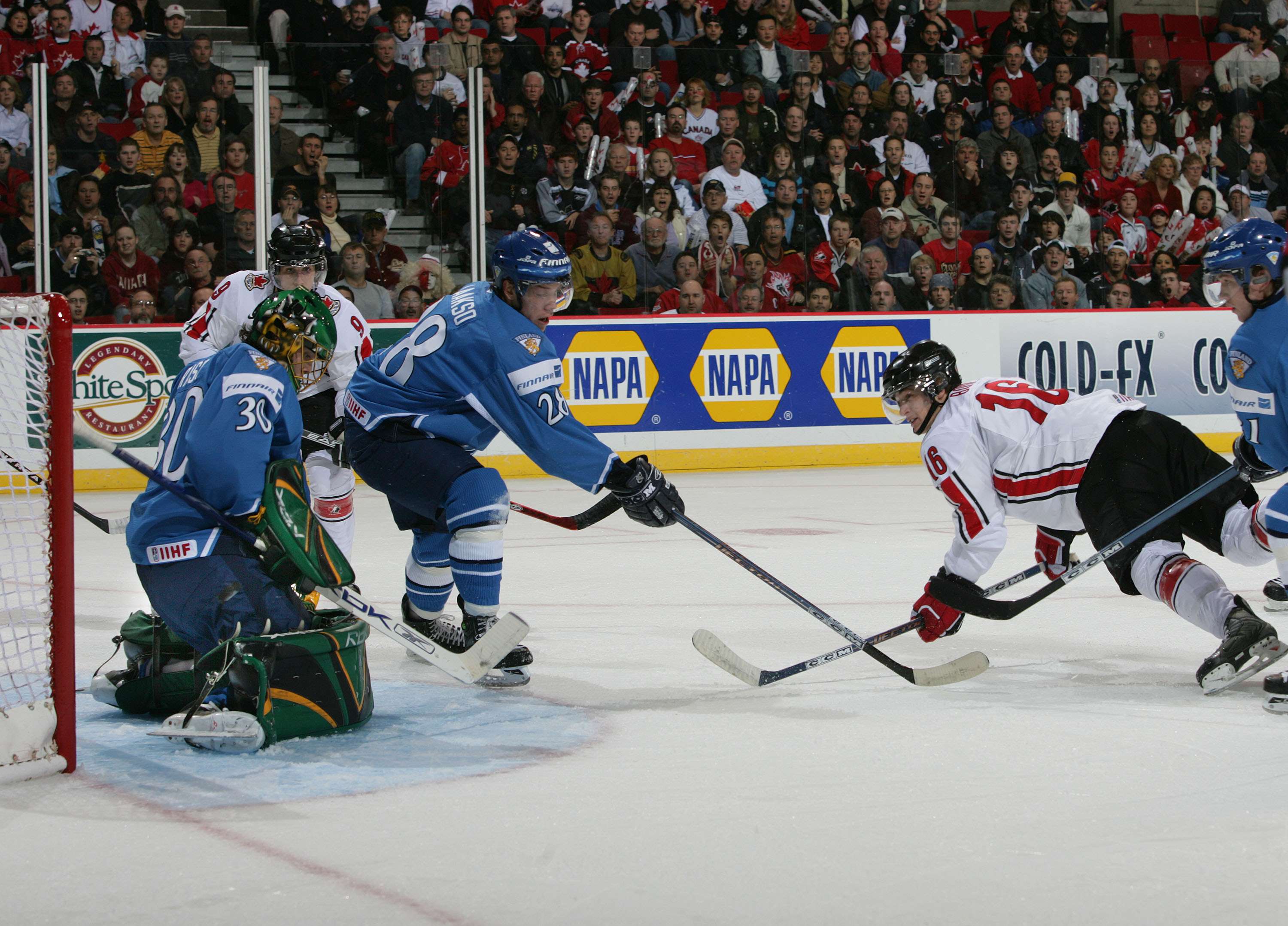 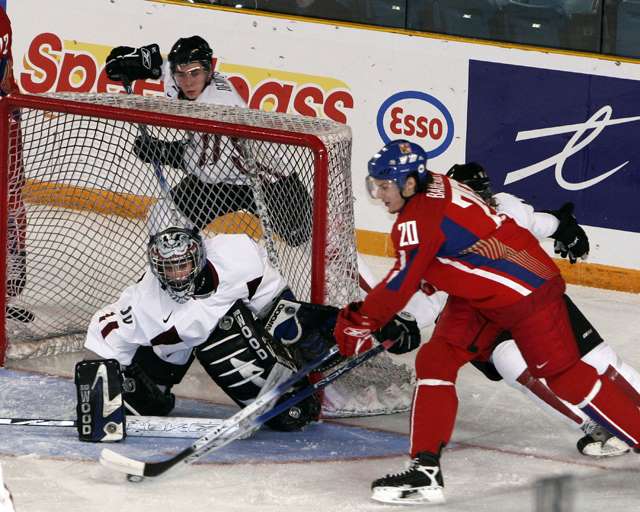 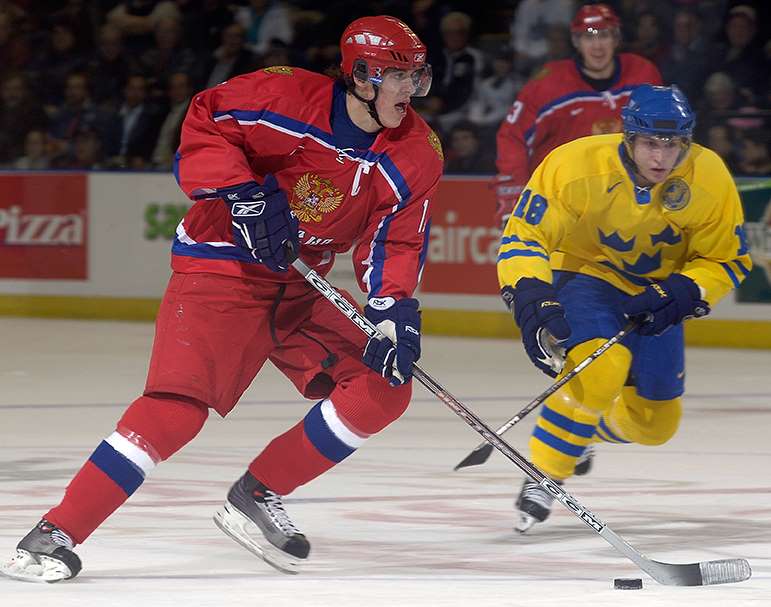