In tight games, players have a tendency to take the safe play and protect. Meropoulis played hard and forechecked relentlessly throughout the gold medal game. Most impressively, though, when given an opportunity to end the game and win her team the 2017 Esso Cup, the captain did not disappoint. She personified the Slash mentality this year: to never give up, keep working and just believe.

As one of the most consistent goaltenders all week, Thibault’s performance in the gold medal game gave her team a chance to win. In the first and second periods, the Harfangs were outshot 14-3 and 15-8. Thibault made several saves off odd-man rushes and never backed off in scramble plays. The veteran finished the week with a 0.50 goals-against average and .980 save percentage in four games.

Truter saved her best game for last, putting in a three-point performance to help lead the Lightning to a bronze medal. The 15-year-old was part of a dynamic line that had success all week, but more than often it was Truter who set up her teammates with a goal and five assists in her first six games. But on Saturday, Truter took charge offensively and scored the game-winner for Durham West.

1. The City of Morden
Taking on the challenge of hosting a national championship is not only daunting from an organizational stand point, but also a promotional one. Morden and the surrounding communities have embraced the Esso Cup and filled the stands every day. From school age children cheering on the Mid-Isle Wildcats - “P-E-I! P-E-I!” - to a sell-out crowd in the second semifinal, all the teams playing in the 2017 Esso Cup have been treated to some incredible Manitoba hospitality, which is sure continue for the medal games.

2. Harfangs du Triolet
From front to back, the Harfangs du Triolet have steadily become more comfortable playing on the national stage and are flying high heading into the Esso Cup final. Netminder Michelle Thibault was solid in the Harfangs' 2-1 semifinal win and was supported by a defensive team effort in front of her, with players blocking shots and clearing the front of her net. Chloé Gendreau and Zoé Thibault took the lead offensively with two points each.

3. St. Albert Slash
Scoring by committee, relentless defence and solid goaltending. The St. Albert Slash used every weapon in their arsenal to finish the preliminary round 5-0 and maintain that perfect record through their semifinal. Madison Willan, Tyra Meropoulis and Cassidy Maplethorpe were the leaders once again on Friday, with Willan scoring the only goal of the game 57 seconds into the first. After that, St. Albert’s teamwork prevailed, sending the Slash to the gold medal game.

1. Three-Point Club
The top star honour is shared by four players who recorded three points. Makenzie McCallum from Pembina Valley and Madison Willan, Cassidy Maplethorpe, and Stephanie Markowski, all from St. Albert, recorded three points on the final day of the preliminary round. McCallum had a hat trick in Pembina Valley’s 6-1 win. Willan and Maplethorpe had two goals and an assist, while Markowski had a goal and two assists in St. Albert’s 7-3 victory.

3. Mid-Isle Wildcats
The work ethic and enthusiasm of the Prince Edward Island team throughout the Esso Cup has been an inspiration. They made time to sign autographs in the lobby, played every game with everything they had, and, at the start of their final game, sang O Canada at the top of their lungs, stirring the entire crowd to join in.

One of the youngest players at the Esso Cup, Kate Gallant played like a veteran in a must-win game for the Lightning. Gallant scored four goals and assisted on the game-winner in an 8-1 win over Mid-Isle that kept Durham West’s playoff hopes alive.

The first goaltender to earn three wins, Drever made 37 saves for her second shutout of the Esso Cup. Her play has helped the Slash maintain a perfect record thus far through the national championship, giving the Albertans a chance to finish at the top of the standings.

Kirwer’s two-way play has been consistent through the first four games of the Esso Cup. Against Prince Albert, she scored the game-winner and assisted on an insurance goal late in the game, keeping St. Albert perfect.

Looking to stay in the hunt for a top-spot in the playoffs, Pembina Valley had a much-needed increase in offense, thanks in part to the play of MacKenzie McCallum. The right winger had a goal and assisted on the game-winner to help lead the Hawks to a 4-1 win on Day 3.

When the Prince Albert Bears were in need of an offensive outbreak, they got it from Jadyn Kushniruk. Two goals, including the game winner, propelled the Bears to a 6-1 victory in what had become a must-win game to stay within reach of the playoffs.

In a battle of two teams with perfect records, Cassidy Maplethorpe’s goal proved to be the difference. St. Albert maintained the unblemished record and sit alone atop the standings, thanks to Maplethorpe’s third period game-winning goal. She also assisted on the Slash’s first goal of the game, helping her team get back into the game, after falling behind early.

Her scoring streak started in the second period and ended in the third with a natural hat trick, thanks to an empty-net goal. Gendreau helped secure a 4-1 win for the Harfangs du Triolet and now leads the Esso Cup in goals and points.

The puck-stopper made 41 saves in her Esso Cup debut, helping the Lightning pick up its first win. The 16-year-old goaltender finished the night with a .976 save percentage, which puts her among the tournament leaders.

After a slow start Sunday night, Mid-Isle coaches showed a lot of confidence in Gallant, going back to their netminder by giving her a second-straight start. She gave her team a chance to win right up to the end, turning aside 31 of 34 shots.

The Hawks goaltender made 35 saves, including several one-timers and a huge cross-crease glove save, to lead the hosts to a tournament-opening win over Prince Albert. The Bears had a decided advantage in shots, and peppered Oswald with tough shots, but could not beat her more than once.

Willan scored once and had two assists to help the Slash blank Mid-Isle. After posting a pair of helpers to help the Pacific champs build an insurmountable lead, she whipped in the final goal with just over five minutes to go. Willan was relentless on the forecheck and played honestly in her own end.

Gagné capitalized on a power play early in the first period to open the scoring for the Harfangs , and assisted on an insurance marker midway through the second to ensure the Quebec champions started with a win. She was everywhere - a constant offensive threat for Triolet. 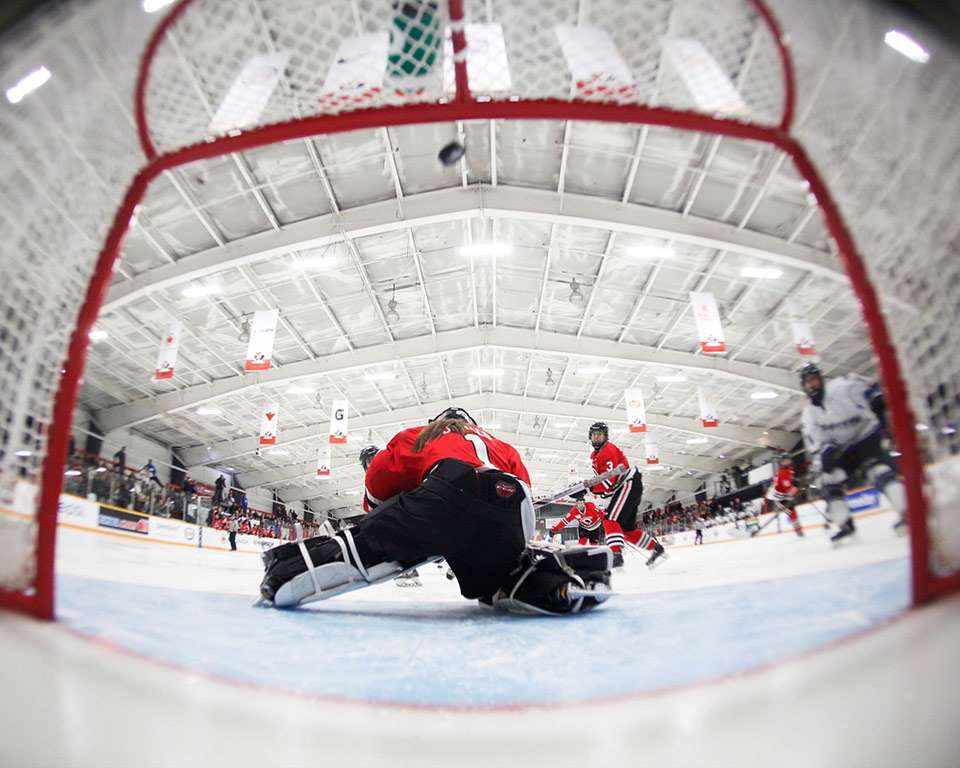 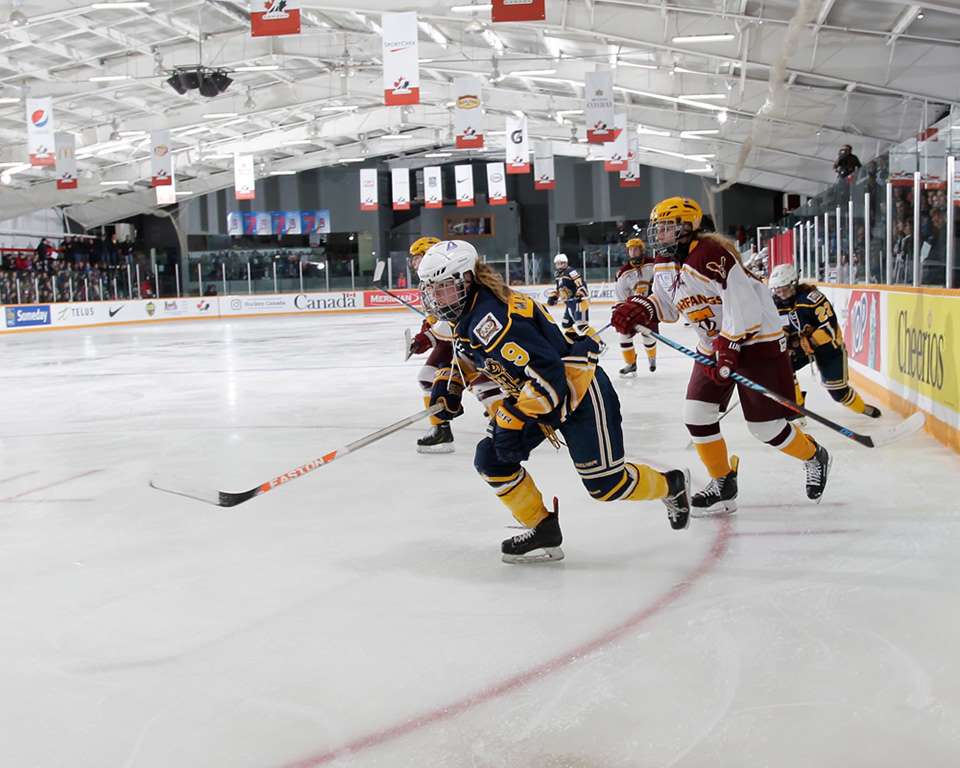 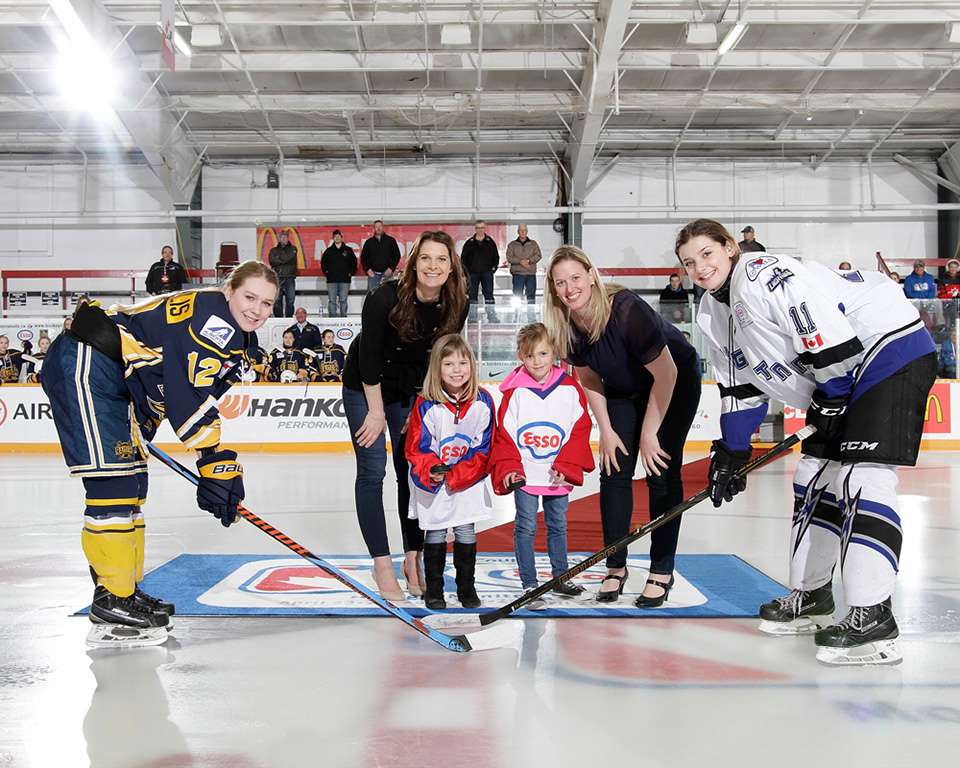 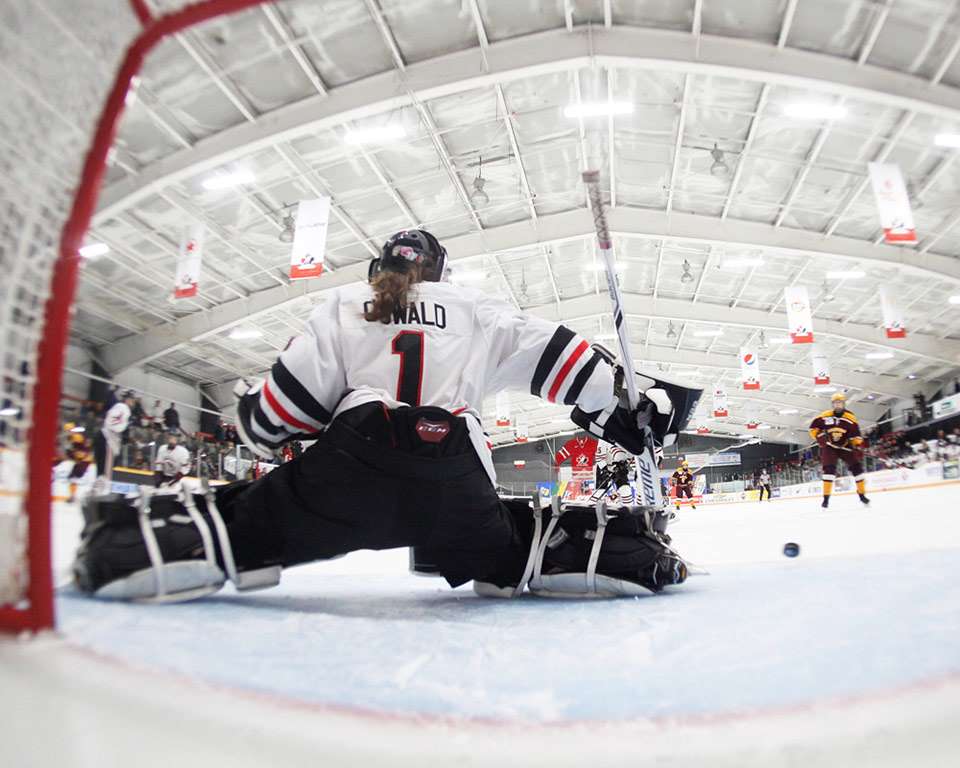 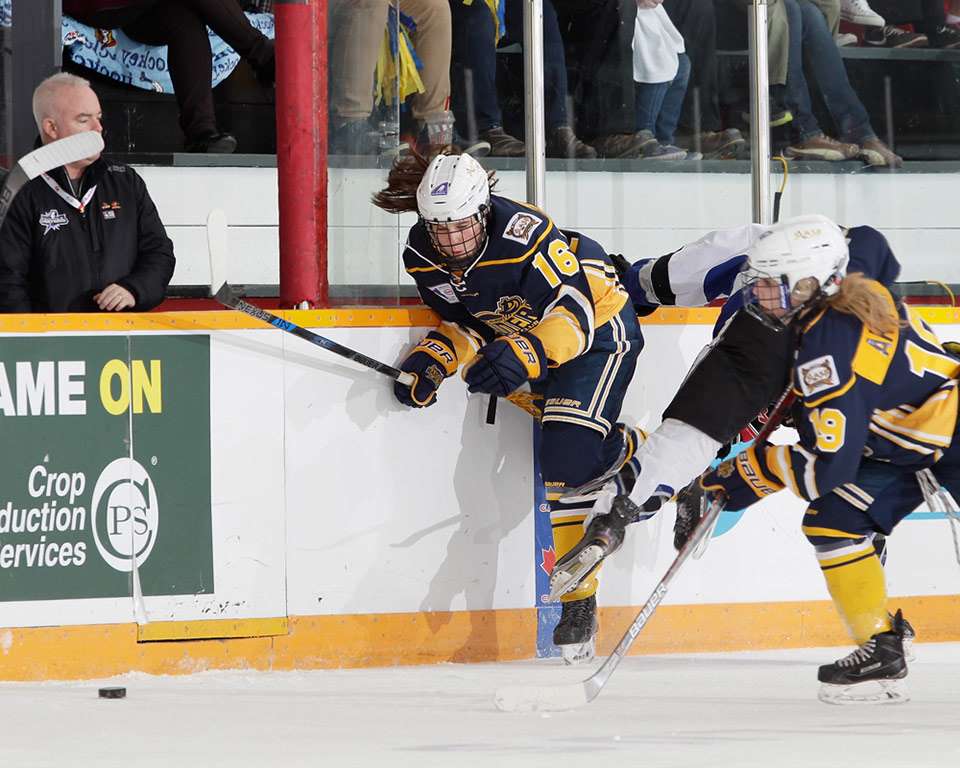 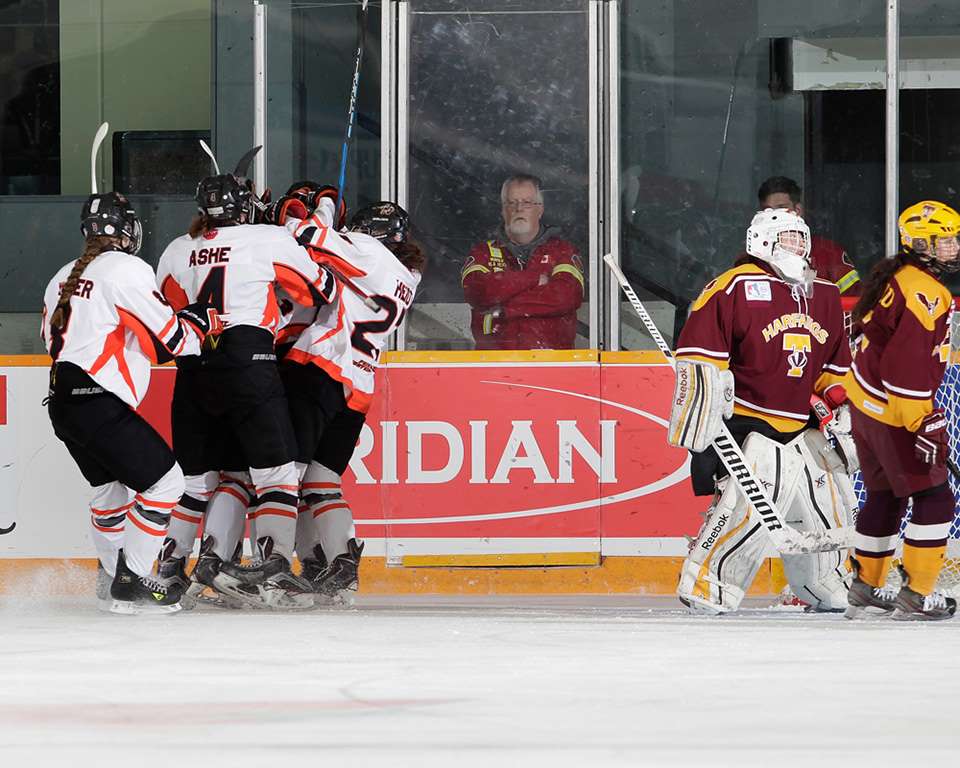 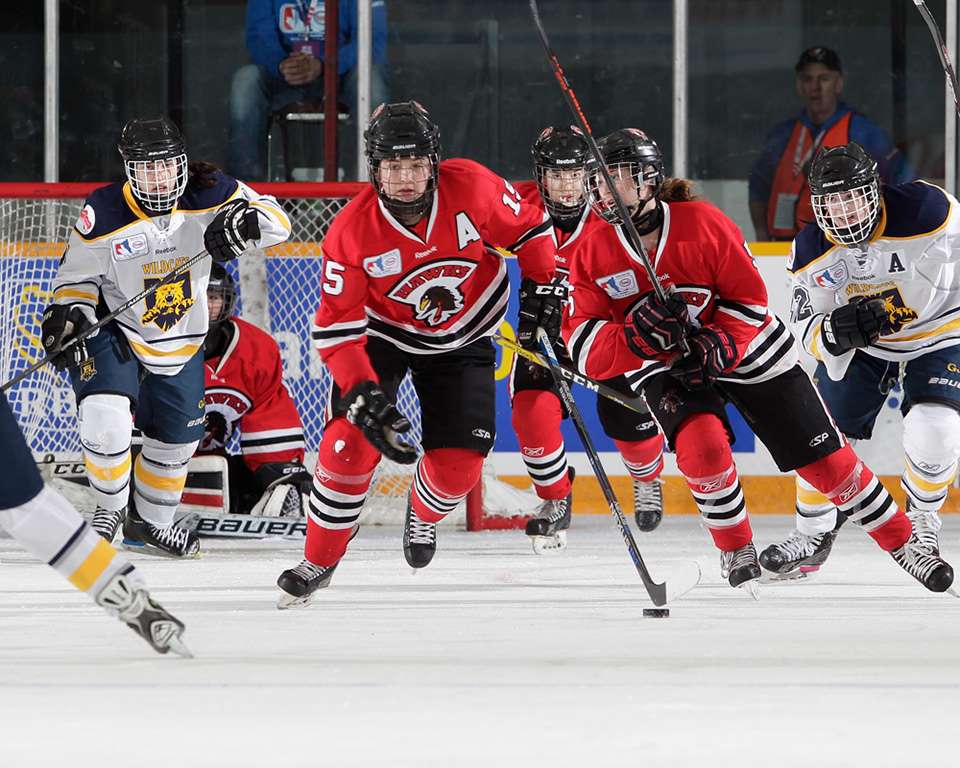 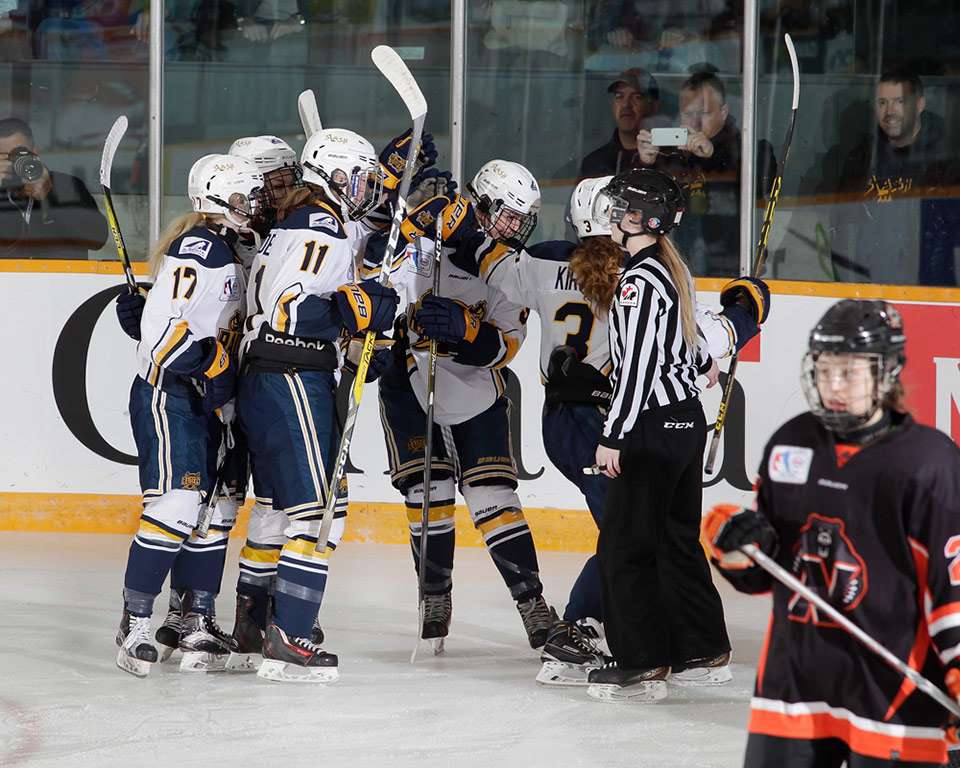 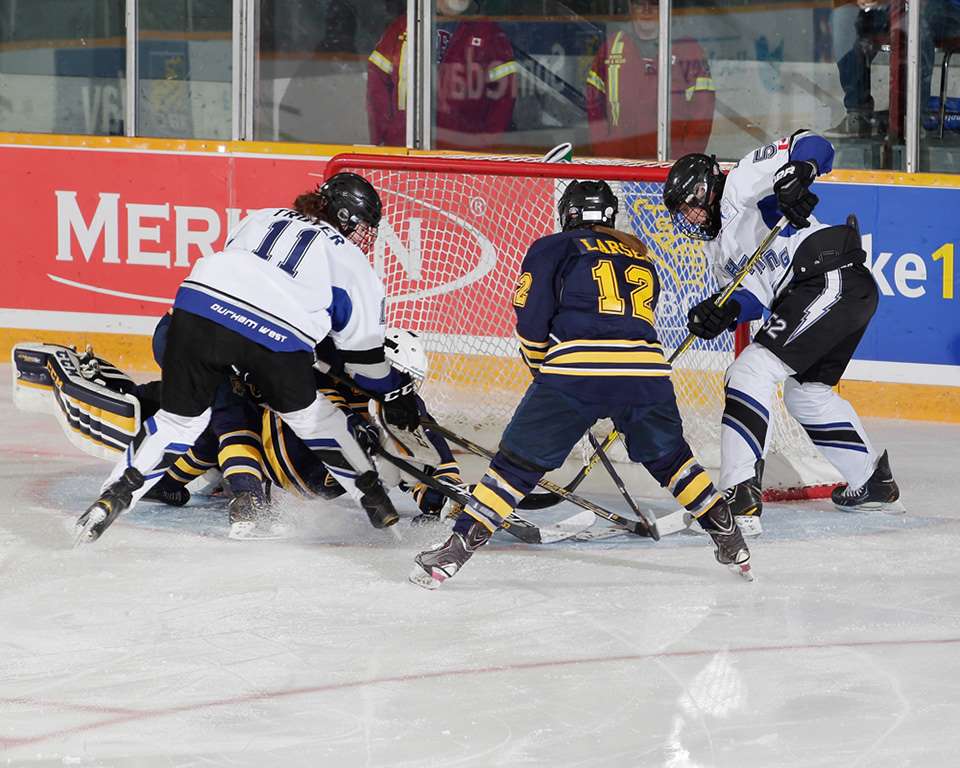 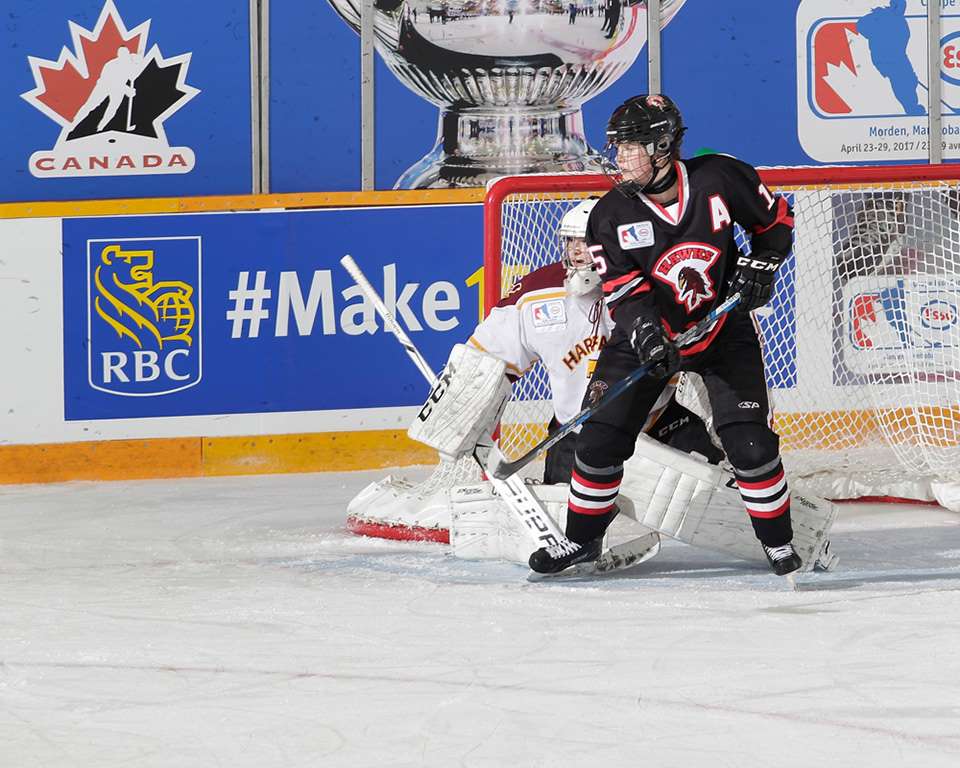 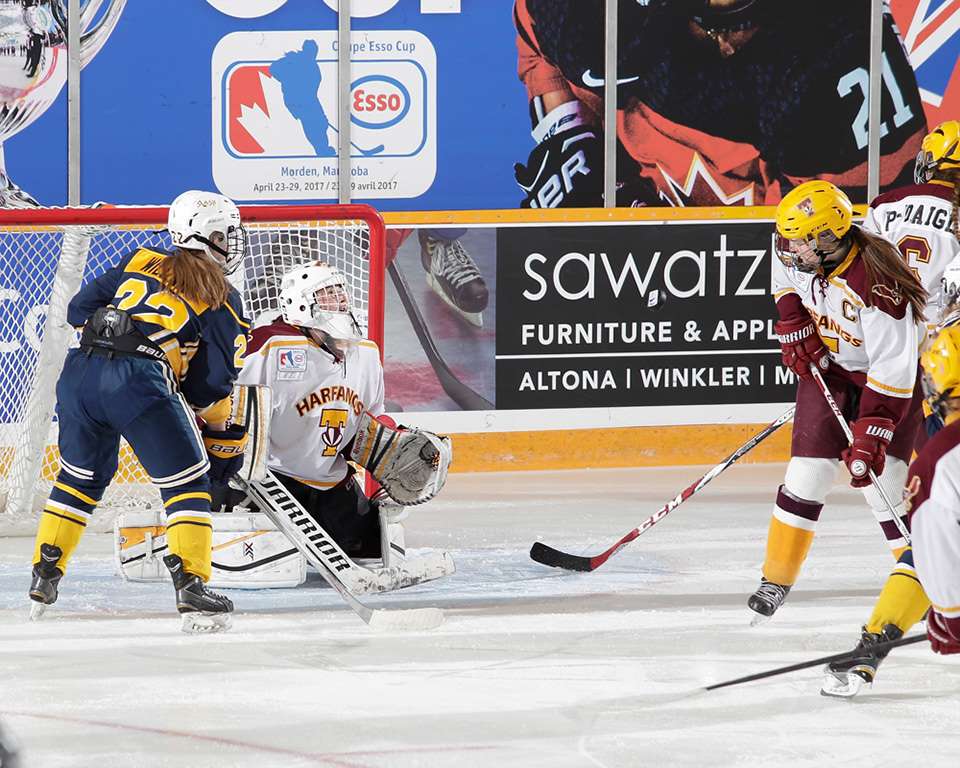 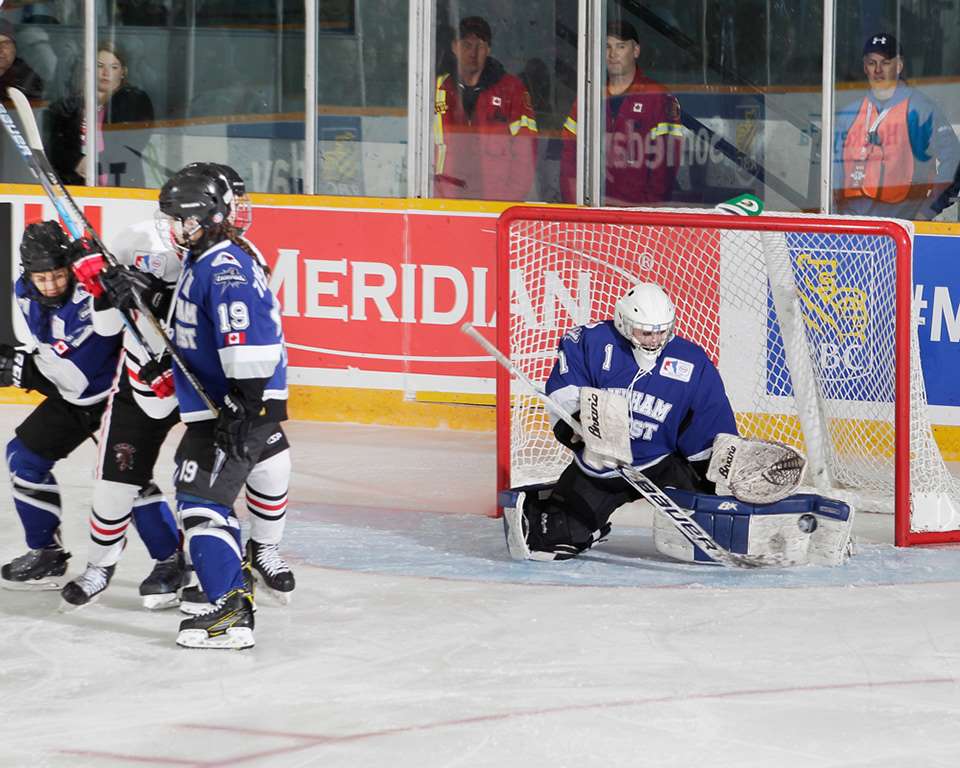