Potomak scores in overtime to help B.C. edge Quebec 3-2 on opening day of U18 nationals

CALGARY, Alta.  – Fans lined the seats of the Markin MacPhail Centre to watch the second game of the 2013 National Women’s Under-18 Championship. The game featured British Columbia taking on Quebec. It was clear from the first puck drop that the game could go either way. 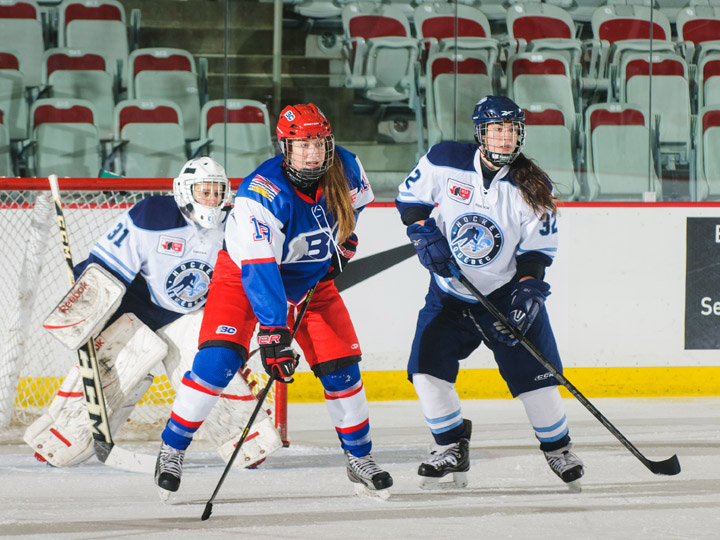 The first period was scoreless, with both teams taking penalties but not capitalizing on power play chances.

Right off the whistle of the second period, Quebec had a strong scoring chance, but it was Hannah Miller (Vancouver, B.C./Okanagan Hockey Academy, JWHL) first on the scoreboard just 29 seconds into the game with a strong slap shot assisted by Sarah Potomak (Abbotsford, B.C./Pursuit of Excellence, Midget AAA). However, the Quebec team was not about to let B.C. take control.

Some controversy would follow with an offensive surge generated again by Miller and Potomak that resulted in a goal that was declared unofficial due to the net being off prior to the shot.

Shortly after, at 7:27 in the second, Stéphanie Lalancette (St Félicien, Que./Limoilou, RSEQ) scored the equalizer assisted by Marika Labrecque (Lac Etchemin, Que./Est, Midget AAA), giving the Quebec fans something to cheer about. But a mature and experienced B.C. team continued to press on and Brie Bellerive (North Vancouver, B.C./Okanagan Hockey Academy, JWHL) found the back of the net off an incredible pass up the middle from Micah Hart (Saanichton, B.C./Okanagan Hockey Academy, JWHL) at 10:59 in the period.

Strong play and close chances continued throughout the period with both teams not afraid of contact or taking the puck end to end. Unreal saves were made by both goalies Valencia Yordanov (Port Coquitlam, B.C./Fraser Valley, BCFMAAAHL) and Sarah-Maude Labrecque (Granby, Que./Sud, Midget AAA).

Two and half minutes into the third period, Ève-Audrey Picard (Longueuil, Que./St-Laurent, RSEQ) made a behind the back pass to Alexandra Labelle (St-Louis de Gonzague, Que./St-Laurent, RSEQ). Labelle shot the puck on net and Yardanov fumbled the rebound, with Picard not missing her chance to bury the puck in the back of the net tying the game at 2-2 apiece.

Miller took a penalty late in the third, but the team’s penalty kill players stepped up to keep the game tied.

The overtime period was five minutes of four-on-four action. There were close chances in both ends, but it was finally Potomak who scored the game-winner, assisted by Natalie Stanwood (West Vancouver, B.C./Pursuit of Excellence, Midget AAA). An ecstatic B.C. team celebrated their long fought battle and well-earned win.

“The main thing is to stay calm,” she said after the game. “We don’t talk about tomorrow until today is done. We take things one day at a time and as soon as the win song ends, we’re focusing on tomorrow, which is Ontario Blue.”

Players of the game went to Hart and Picard. B.C. takes on Ontario Blue tomorrow at 4 p.m. MT, while Quebec is up against Team Atlantic at 10 a.m. MT inside Hockey Canada’s home arena. Watch live on FASTHockey by visiting www.hockeycanada.ca/nwu18.