U9 Game Play Officiating Guidelines – Role of the Official

Special thanks to B.C. Hockey for sharing its officiating guidelines

Hockey Canada recommends the inclusion of officials at the U9 level. At this level a one-official system will be employed. While this is not an official Hockey Canada Officiating Program (HCOP) system, this section provides an outline to assist local officiating programs with integrating officials into this developmental stage of the game. The system provides officials with an opportunity to experience several aspects of officiating, while keeping the operating costs at a manageable level for the teams and minor hockey associations.

There are numerous benefits for officials when considering the aspects of building foundational skills. This is a valuable opportunity for newer officials to put on their uniform, get on the ice in live action and learn basic aspects of being an official in a less formal and positive atmosphere. Basic skills include dropping pucks, skating skills, foundational positioning, spatial awareness, establishing good sightlines and making decisions such as goals and minor infractions.

This allows officials to apply newly-acquired information they received in their clinic in a game environment. It also provides an excellent opportunity for senior officials to mentor newcomers by shadowing them on the ice or evaluating them from the stands. The ability to mentor officials at ice level in this structure provides instantaneous feedback and assists in preparing these officials for full-ice games in a two- or three-official system.

Having an official for the half-ice games provides players with more structure than cross-ice games at the Timbits U7 level. It also presents a more realistic game environment, while allowing the coaches to keep their focus on the players.

Flexibility is an important component to operating in a one-official system within the U9 structure. There is no absolute way to handle every possible scenario. However, game flow and establishing a basic structure to the game is the primary focus. Officials will NOT be required to call infractions for icing or off-side as the appropriate rink dimensions and markings are not available.

There will be one face-off location. This will be located approximately halfway between the goals (see Figure 5). Coaches and arena staff may mark the centre face-off location with a temporary marking for game play purposes. 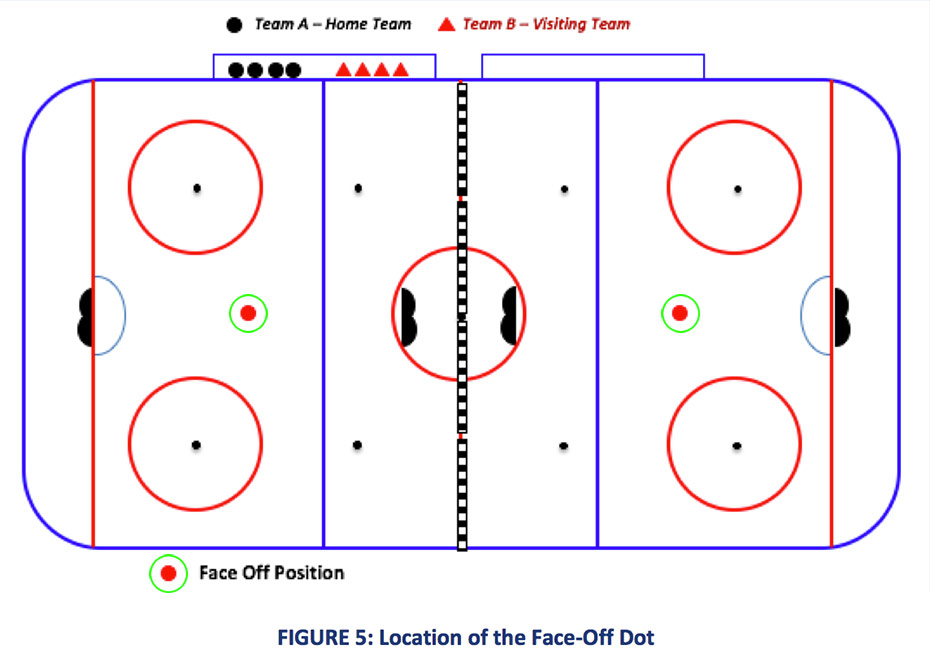 Foundational positioning principles will be used. The concept of the ‘cone’ should be reserved for when full-ice play begins. Under the half-ice structure, approximate positioning should be used to get officials comfortable with their proximity to the goal (see Figure 6). Officials should follow the play approximately 2-3 metres behind the puck carrier. They should remain about one metre from the boards or playing area perimeters. The examples on Figure 6 show guidelines for establishing recommended end-zone positions.

Officials are encouraged to move towards the net on goal situations and away from the play towards the boards as play comes towards them, allowing players to pass by; the official can then follow up the ice at a safe distance. 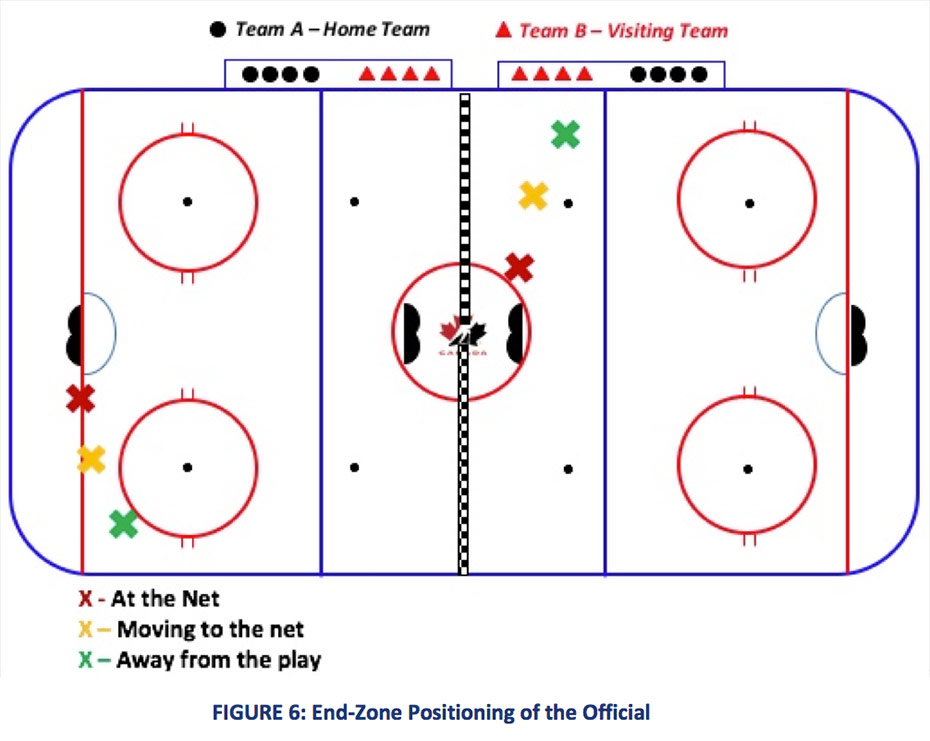