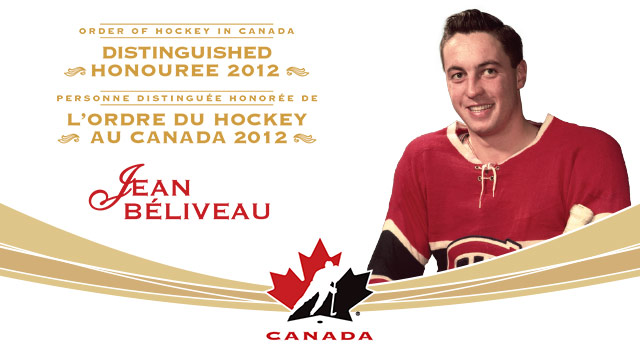 • Played on 10 Stanley Cup-winning teams as a member of the Montreal Canadiens.
• Made the NHL All-Star Team 10 times
• Won the Art Ross Trophy as the NHL’s top scorer in 1955-56
• Won the Hart Memorial Trophy as the NHL’s Most Valuable Player in 1956 and in 1964
• Won the Conn Smythe Trophy as the NHL’s Most Valuable Player in the playoffs in 1965
• Appeared in 1,125 NHL regular season games, amassing 1,219 points (507g, 712a)
• Also appeared in 162 NHL playoff games, amassing 176 more points (79g, 97a)
• The leading scorer all time for Montreal and the all-time leading scorer in Stanley Cup history as well.
• After playing a total of five regular season games in 1950-51 and 1952-53, he played another 18 seasons with Montreal, and in 10 of those he led the team as their captain.
• Played junior hockey as a member of the Quebec City Citadelles and senior hockey for the Quebec Aces.
• First played organized hockey in Victoriaville, Quebec.
• After he retired as a player, he continued to serve as a team executive for the Canadiens and official spokesperson for the club.
• Worked for the Canadiens in public relations until 1993 as senior vicepresident of corporate affairs but he maintained ambassadorial prestige with the team even to this day.

• Born on August 31, 1931 in Trois Rivieres, Quebec
• Was nicknamed “le Gros Bill” after a popular French song of the day by the same name
• In 1981 he was also named to the selection committee of the Hockey Hall of Fame.
• Also president of Jean Béliveau, Inc., a thriving business with varied interests in restaurants, real estate and other concerns.
• In 1994 he became the only NHL player to be offered the position of Governor General of Canada, but Béliveau turned it down because the job would have taken too much time away from his family.
• Beside his activities with the Canadiens, Béliveau set up the charitable Jean Béliveau Foundation, established in 1971. In 1993, Béliveau transferred the foundation to the Society for Disabled Children.

• When Béliveau retired as a player, the Montreal Canadiens established the Jean Béliveau Fund for underprivileged kids.
• Clarence Campbell, president of the NHL, said at the time of his retirement: “Any parent could use Jean Béliveau as a pattern or role model. He provides hockey with a magnificent image. I couldn’t speak more highly of anyone who has ever been associated with our game than I do of Jean.”
• Béliveau received an honourary degree in physical education from the University of Moncton, New Brunswick.
• In 1998, Béliveau was made a Companion of the Order of Canada, the country’s highest civilian award.
• In 2001, his name was added to Canada’s Walk of Fame, the same year he was honoured with his portrait on a Canadian postage stamp.
• In 2008, the Canadian Pacific Railway named a station in his honour.
• McGill University gave Béliveau an honourary Doctor of Laws degree in 2006.
• On June 29, 2009, he was named an honourary Team Canada member and honourary captain of Canada’s 2010 Men’s Olympic Hockey Team.