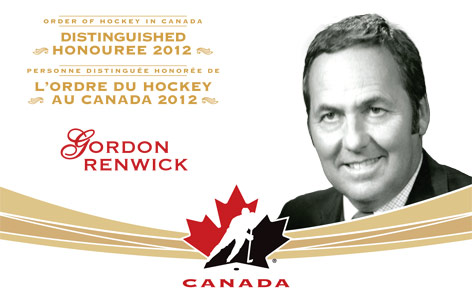 • President of Galt Hornets (senior) from 1966-1973
• Helped Galt Hornets win Allan Cup in 1969 and 1971
• Finished third with Galt Hornets at 1971 Ahearn Cup in Stockholm, Sweden
• Was the first to introduce financially successful Russian Club Team tours to Canada, enhancing Russia-Canada rivalry to great benefit of both countries
• Served as chef-de-mission for European club teams visiting North America during 1970s
• Served as president of the OHL senior league from 1979-81
• President of Canadian Amateur Hockey Association from 1977-79
• Played a large leadership role in the foundation of Hockey Canada’s Program of Excellence
• Received CAHA Volunteer of the Year Award in 1979
• Chaired the Royal Bank Cup• Was instrumental in organizing the initial National Wrigley Midget Tournament, now known as the TELUS Cup
• Awarded OHA Gold Stick, for outstanding service to the game other than as a player, in 1991
• Vice-president of the International Ice Hockey Federation from 1986-94
• Exercised extraordinary leadership in firmly establishing the vital of Canada and the CAHA, now Hockey Canada, in the International Ice Hockey Federation and international hockey generally at all levels
• Served the IIHF on behalf of Canada for a total of 20 years
• Upgraded the entire IIHF financial and bookkeeping systems, introducing more sophisticated, fully computerized accounting reports and statements
• Headed the Statutes/Bylaws Committee as well as the Rules Committee as the IIHF looked to bring uniformity to North American and European hockey
• Also led the IIHF’s marketing team, playing a large role in a number of international tournaments
• Was primarily responsible for arranging, for the first time ever in International hockey, an external auditing contract for annual inspection of the books, in an effort to reassure the membership (the federations around the world) that the finances of the IIHF were being responsibly managed, a system that is in place and operating well to this day
• Played a major role in execution of the Canada Cup and World Cup