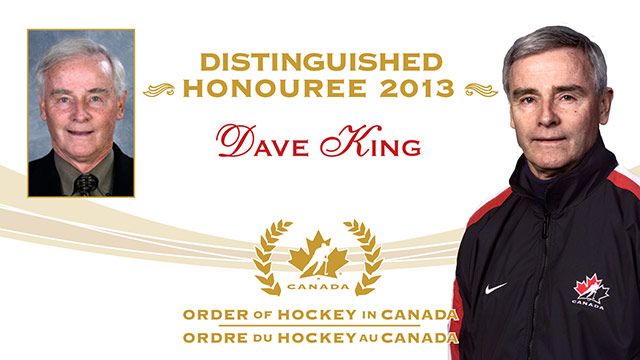 • Has actively coached at the junior, university, major junior, NHL and international levels for close to 40 years
• Was one of the most significant contributors to Hockey Canada coaching development programs over a period of more than 25 years. He was a difference maker in how coaching in Canada progressed in the 1980s and 1990s.
• Internationally, King was head coach of the national junior team, the national men’s team, and at World Championships and Olympic Winter Games between 1982-1992
• Enjoyed his greatest Olympic success at the 1992 Games in Albertville, France as he led Canada to a silver medal.
• Also coached Canada in the World Championships from 1989 to 1992, capturing silver medals in 1989 and 1991. Coach Team Canada to a fourth place finish in the 1988 Winter Olympic Games in Calgary.
• Guided Canada’s Olympic team to a fourth place finish at the 1984 Winter Olympic Games in Sarajevo.
• Coached Canada to its first World Junior Championship gold medal at the 1982 World Junior Championship
• An assistant coach with the bronze medal-winning Team Canada at the 1983 World Championship
• Began coaching at the University of Saskatchewan in 1972
• Also coached the Saskatoon Junior B Quakers, the Tier II Saskatoon Olympiques and the Western Hockey League’s (WHL) Saskatoon Blades and Billings Bighorns before returning to the University of Saskatchewan in 1980

• Born on December 22, 1947 in North Battleford, Saskatchewan
• Earned a Bachelor’s degree in Education and Bachelor of Science
• Based on his experiences in Russia, King co-authored a book with sports journalist Eric Duhatschek. Titled King of Russia: A Year in the Russian Super League, the book was released in October 2007
• Dave and his wife, Linda, have three children, Andrew, Jennifer and Scott, as well as four grandchildren. King’s son Scott plays professional hockey in Germany.

• Received the Order of Canada Award in October of 1992;
• Was inducted into the Canadian Olympic Hall of Fame in 1995.
• In 1996, he joined Wayne Gretzky and the 1972 Team Canada squad as recipients of the inaugural Canadian Hockey Awards.
• Was also presented with the Father David Bauer Award for leadership.
• In 2001, he was inducted into the International Ice Hockey Federation Hall of Fame.
• In 1978, King was named the WHL Coach of the Year.