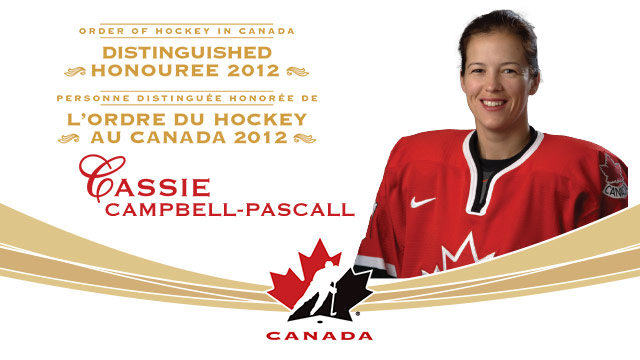 • Has an Honours Sociology Degree from the University of Guelph
• Treasurer on the Canadian Women’s Hockey League Board of Directors
• Runs an annual street hockey tournament in Calgary, Alta. to benefit the Ronald McDonald House
• Has worked as a colour commentator for TSN, The Score, Rogers Sportsnet and the NHL Network and did radio work for Calgary Flames games on The Fan 960 and Hockey Night in Canada radio – Was the Bell Media Olympic Consortium analyst for female hockey at the 2012 Olympic Winter Games
• Along with Hockey Hall of Famers Bobby Orr and Mike Bossy, Cassie is a spokesperson and host for Hockey Canada’s Chevrolet Safe & Fun Hockey program
• A Special Advisor to Scotiabank for it’s hockey programs and properties
• Supporter of CARE (www.care.ca), an organization that places special focus on working alongside women and girls living in poverty because, equipped with the proper resources, women and girls have the power to help whole families and entire communities escape poverty
• Joined Peter Mansbridge live on CBC for the Vancouver 2010 announcement
• Born on November 22, 1973 in Richmond Hill, Ont.